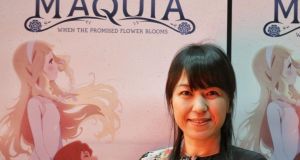 Mari Okada: after being bullied at school she withdrew from public life, becoming one of Japan’s hikikomori, the estimated half million Japanese youths who live as modern-day recluses, often never leaving their bedrooms

Animators, by definition, tend to stay behind the scenes and out of view.

There are a few exceptions, of course. Walt Disney was essayed by Tom Hanks in the 2013 Mary Poppins origins drama, Saving Mr Banks. Chuck Jones’ years at Looney Tunes and Merrie Melodies, a time when he created Bugs Bunny, Daffy Duck and Elmer Fudd, are chronicled in the 1991 documentary, Chuck Amuck.

Last month, Mari Okada, the prolific anime writer, made some kind of history, when it was announced that Japan’s public broadcaster had commissioned a movie based on her best-selling autobiography, How I Went from Not Going to School to Writing Anohana and The Anthem of the Heart.

Okada will be played by J-pop idol Atsuko Maeda in the film. An English-language translation of the book was published last month.

It’s a big deal for a woman best known as a screenwriter. But her life makes for a seriously impactful read. One incident detailed in the book is emblematic of Okada’s wince-making candour.

In her early 20s, she describes her insecurity in dating somebody for the first time. So she hatches a plan: “I was afraid of what would happen if he overestimated me… The answer I arrived at was to leave open the toilet door and do my business in front of him. If he didn’t hate me after that, then I could believe his affection was genuine.”

Okada grew up in Chichibu, the mountainous rural town where her poignant teen anime Anohana and The Anthem of the Heart are set. A sensitive child, she was bullied at primary school and began skipping days to avoid her tormentors and as a way to deal with increasingly crippling social anxiety.

As a young adolescent she changed her style in an effort to better fit in, only for her classmates to tell her: “Stop trying to be someone you’re not.” She never attended school again and withdrew from public life, becoming one of Japan’s hikikomori, the estimated half million Japanese youths who live as modern-day recluses, often never leaving their bedrooms.

She ate only noodles, seldom washed or showered, played videogames, lived in the same tracksuit, and covered her hands with bandages.

Okada’s frustrated and melodramatic mother – nicknamed “the actress” among family and friends – once threatened the hermit teenager with a knife, saying: “I can’t bear having a child like you. I’ll kill you,” before breaking down in tears. “In that moment,” Okada recalls, “she seemed less like a human and more like a tiny, writhing animal.”

Her mother’s boyfriend added to the domestic strife by threatening and harassing Okada. He ordered her to draw breasts. She soon began peeling her fingernails.

Many hikikomori are never seen again, not even by their parents. It was Okada’s writing skill that managed to get her through school and, ultimately, out of her slump. A sympathetic teacher encouraged her to turn in homework, regardless of attendance, saying: “You don’t have to come to school. Let’s apply for newspaper prizes together.”

Sure enough, her essays won local and national competitions. Few thought that she’d be able to survive in the “real world” but after graduation, Okada moved to Tokyo and enrolled at the Amusement Media School to study games scenario writing.

In 1998, director Testsuro Amino hired Okada to write six episodes of the dystopian anime, DT Eightron. It was a major turning point for Okada, who quickly rose through the ranks to become one of the most prolific anime writers. Her credits including Red Garden, Mobile Suit Gundam: Iron-Blooded Orphans, Hanasaku Iroha – Blossoms for Tomorrow, and A Lull in the Sea.

The winner of the 16th Animation Kobe Award – the medium’s highest honour – has long toyed with the idea of translating her troubled youth into anime.

Aged 22, she pitched a film called The World Outside, about a shut-in girl and her fraught relationship with her mother. That screenplay was never published, but elements of it were cannibalised for Anohana (about a young girl unable to leave the house), Anthem of the Heart (about a girl who goes mute after her parents’ divorce), and now for Okada’s directorial debut, Maquia: Where the Promised Flower Blooms.

Okada has touched down in Dublin for the premiere of Maquia at the 10th annual Japanese Film Festival in Ireland. Cool, confident and quick to laugh, it’s hard to reconcile this person with the traumatic upbringing described in her breathtakingly honest autobiography.

A fan of Cartoon Saloon’s pinniped-themed Song of the Sea, she even smiles through her disappointment at not seeing any seals on her morning jaunt to Howth. This is only her second visit to western Europe, having toured London in 2007 to research her much-admired work on Black Butler.

It’s precisely two decades since she began working in anime. I wonder why it has taken her so long to direct one of her own screenplays.

“It’s not normal in the anime industry for a writer to become a director,” says Okada, speaking through a translator. “Normally the animators become directors. I never realised there was a possibility of becoming a director, until other directors and people in the industry encouraged me.”

One of these cheerleaders was Kenji Horikawa, the president of anime imprint PA Works, who, in 2012 asked his star screenwriter to produce a “100 per cent Okada anime”. She hopes she knows what he meant by that term.

“It’s hard for me to say but what I try to do is to be true to my feelings,” says Okada. “And not to do something just because that’s popular right now, or because that’s what the rest of the team are interested in. And not to second guess what the fandom would like. I’m not interested in that. I need to do what I think is right, and I think that’s what gives my work its uniqueness. Also I want to write characters who show weakness, because it’s only in weakness or sadness, that characters can develop strength.”

She laughs: “But at some point during production I stopped thinking about making something that was ‘100 per cent me’ and became confident enough to give instructions and listen [to] the staff. Animation is very collaborative.”

Maquia: When the Promised Flower Blooms eschews current voguish genres in favour of an original mythologised medieval fantasy. That in itself is, if not 100 per cent, a rather large dollop of Okada.

“It’s true,” she says. “There aren’t original fantasy films being made in anime industry right now. You get fantasy films that are based on a manga or novels but everyone visualises fantasy differently so it’s hard to get everyone on the same page when you’re creating a world from scratch. That was the biggest change for me. From writing at home, I’m now working in the studio and trying to speak animator instead of screenwriter.”

Perhaps inevitably, Maquia concerns motherhood. Maquia is a tearful, lonely girl who lives peacefully with her immortal fairy-folk clan until an army, seeking to steal away her sister, invades. Maquia escapes and finds a human baby, Ariel, whom she raises as her own. But as the early death of a family dog flags, the differing lifespans faced by Ariel and Maquia, can only result in heartbreak. In keeping with her previous teen-themed features, Okada’s directorial debut both depicts and inspires crying.

“I wanted to make something that moved people,” she says. “Not just to tears but to anger and to real heartbreak. I wanted it to be a real emotional rollercoaster.”

Okada talks about the death of her cat during production, a loss that fed into the tragic aspects of Maquia’s immortality. There was more catharsis, too, in the farewell scenes written for a mother and daughter.

Anohana: The Flower We Saw That Day (2011) A group of childhood friends, led by livewire Jinta, have become estranged after the tragic death of Menma, a school chum. Menma reappears, in ghostly form, during their high school years, at a moment when the once-popular Jinta has become a hikikomori.

The Anthem of the Heart (2015) Chatty teen Jun witnesses her father leaving a love hotel with another woman and tells her mother. She’s subsequently blamed for her parents’ divorce and struck mute by a fairy, lest she hurt others with her words. Her inability to speak makes high school and puppy love all the trickier.