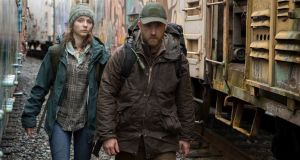 It’s a sweltering day at Sundance London – the UK spin-off of the Park City festival – and Debra Granik’s Leave No Trace is the hottest ticket in a very hot town.

Granik made a splash in 2010 when her sophomore film Winter’s Bone was nominated for four Oscars, including best picture, supporting actor (John Hawkes), adapted screenplay, and best actress for newcomer, Jennifer Lawrence. Her long-awaited third feature, Leave No Trace, once again chronicles the lives of America’s dispossessed, and confirms Granik as one of her country’s pre-eminent practitioners working (unusually) within the tradition of social realism.

Tellingly, she cites Mike Leigh and Ken Loach among her biggest movie-making influences.

“I do think social realism has been downplayed in America,” says Granik. “It had a really beautiful heyday during the 40s. There was some very frank work done by King Vidor and William Wyler – working within the big machinery and running parallel to John Steinbeck. I’ve actually loved seeing those films in the last couple of years. They’re sometimes more cumbersome or melodramatic than European social realism because they are emerging from the studio system.”

Leave No Trace is adapted from Portland author Peter Rock’s survivalist novel, My Abandonment, and stars Ben Foster as an army veteran and New Zealander Thomasin McKenzie as his 13-year-old daughter. The pair live off-the-grid life in a vast national park outside Portland, Oregon, where they forage for mushrooms and earn money by selling on the PTSD medications he is prescribed. When they are discovered by authorities, they struggle to readjust to the workaday world. The film and its source novel were based on an article that initially appeared in an Oregon newspaper.

“The father and daughter were just two of many undetected dwellers living in this very large urban park,” says Granik. “They had been living in a very methodical way unlike many of the other unhoused individuals. Social services intervened and tried to house them. It didn’t work for them. But we don’t know what happened to them after that. Not that I know of that’s why it was rife for adaptation. Because you have to fill in the blanks. The rest of the story is Peter Rock’s imaginings, and then, various other imaginings that happened through our adaptation process.”

Granik’s adaptation process is, as she notes, anthropological in nature. Anything, she laughs, to avoid “coming off like an east coast liberal”.

She and her producing partner Anne Rosellini spent years researching the meth subculture and life in the Ozark forests in southern Missouri before shooting Winter’s Bone. Every sequence and detail of Leave No Trace was researched with similar attention to detail. The introduction of a gentle Oregon teenager (played by Winter’s Bone alumnus Isaiah Stone) and his pet rabbit, Chainsaw, required familiarity with the rabbit fancying circuit. Granik even spent time talking to truck drivers before writing a short scene in which a trucker quizzes Tom to ascertain she’s not in any danger, before he agrees to give the girl and her father a lift.

“That’s how I like to work,” says Granik. “If I don’t know the life it makes sense to ask someone who has lived the experience. Falling into poverty tourism is my overwhelming fear. For example, an army recruiter knows what he says when he’s recruiting and he often comes from the same poverty as the people he is recruiting. He’s not an evil guy trying to get a score. He knows the lives of the people he is talking to. He knows their financial circumstances and that they are seeking the only way out. Someone like that won’t talk to you about what it means to enlist unless you can put aside preconceived notions.

“If asking a teen about how he distributes marijuana, it’s on me not to get him in trouble. You have to be respectful and ethical toward the people you are putting on screen. You have to ask yourself: ‘What is this in service to?’ You have to keep asking what makes these people happy and you want to find people to work with who want to answer that same question.”

Granik was born in Cambridge, Massachusetts in 1963, and grew up in the leafier suburbs of Washington DC. Her grandfather, Theodore Granik, was the creator and host of The American Forum of the Air, a political panel discussion show that began on radio in 1934 before transferring to NBC where it aired until 1956.

She majored in film, feminism and politics at the private Jewish college, Brandeis University, before earning an MFA from New York University, where she was mentored by the minimalist Latvian director, Boris Frumin. Her first jobs in the industry involved making health and safety videos for trade unions. She was the cinematographer of Thunder in Guyana, a 2003 documentary portrait of the American-born Janet Rosenberg Jagan, who became president of Guyana in 1997.

It’s a rather politicised CV. I wonder does she view her feature films as political, too.

“I think it’s very hard to have political views and not have your political bent make it into your films,” she says. “In the society I come from, to deny or avoid politics is, in itself, a political act. There’s a very interesting workshop at Sundance called ‘The Art of Non-Fiction’ which always makes for very robust discussion. Part of the agenda, I suppose, that’s pushed there is the inherent nobility of people. It shouldn’t be intrinsically political to show what it takes for some people to survive. And yet somehow it is.”

Some eight years have elapsed since Granik’s last narrative feature, but she’s been busy, nonetheless, developing a pilot for HBO and crafting Stray Dog, a documentary about Ron Hall, the moonshine-guzzling, tattooed Vietnam veteran who took a supporting role in Winter’s Bone.

Having been an independent operator from the get-go, she’s watching Hollywood’s rather feeble attempts to hire more female film-makers with a degree of detachment.

“The only time I think about being a female is when I engage with the system,” she says. “Otherwise I feel like Pollyanna. It affects me only when I go to a meeting and some guy is reading all the film-makers they represent and there isn’t one woman on the list. That’s when I think: ‘Get me the hell out of here.’ And you know, content is gendered. Maybe if I wanted to make a Tarantino-style film with a lot of explosions, and lots of people getting shot, and gasoline getting poured in someone’s wound, it wouldn’t matter what my gender was.”

She smiles: “I could be D Granik.”