New this week: Hereditary, A Ciambra, Studio 54, The Sound of Music 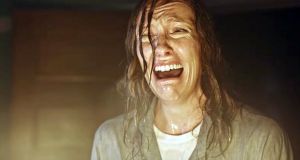 HEREDITARY ★★★★★
Directed by Ari Aster. StarringToni Collette, Gabriel Byrne, Alex Wolff, Ann Dowd, Milly Shapiro. 16 cert, general release, 127 min
How freaky is Hereditary, the “scariest film since The Exorcist”? Imagine if Rosemary’s Baby had a baby with little Gage from Pet Sematary and it climbed to the top of Jacob’s Ladder and fell down with a grotesque splat. Prepare yourself for a discombobulating study of grief that goes beyond the conventional seven stages to take in another 100,000 or so, ranging between psychiatric meltdown, demonic possession, sporadic pyromania and roaring-crying. A nerve-shredding masterpiece. Full review/trailer TB

Carpignano made a splash at Cannes with his debut feature, Mediterranea, a neorealist study that introduced Burkinabe migrant Aviya (Seihon) and a scrappy street-kid named Pio (Amato). Both characters return for this Martin Scorsese-produced semi-sequel, with Pio, a colourful minor character in Mediterranea, taking centre stage. The chain-smoking Pio is the runt of a rambunctious Romani family – all appearing under their own names – in a gypsy community in the Calabrian coastal town of Gioia Tauro. The charismatic teenager becomes the family breadwinner when his father and brother are arrested. TB

Engrossing, surprising documentary on the upmarket disco that defined New York nightlife in the dying years of the 1970s. Students of the era’s innovative dance music must look elsewhere for elucidation – Studio 54 didn’t do much to develop the sounds. Its unhappy innovations were in the fields of celebrity veneration and body fascism. Drawing on new testimony from co-founder Schrager, the film confirms that awful bits of our present started there. DC

From 1965, it’s back in a sumptuous 70mm print. All narrative art is a fake, but the magnificent glaze poured over every moment here has a sheen observable in constellations far beyond the Milky Way. Julie Andrews’s bossy sharpness offers balance to the sweetness of her vocal delivery. The melodies are more eerily and mechanically perfect than anything subsequently produced by Kraftwerk. You know what it’s about. DC

On the night that fashion designer Alexander McQueen took his own life in 2010, his long-time collaborator and friend Mira Chai Hyde felt a presence in her room. It sounds unlikely, and yet, watching this well-crafted biographical documentary, one can empathise. The film-makers have properly scoured the archives in search of their subject and yet McQueen remains a ghostly, unknowable presence throughout. There are illuminating contributions from Hyde, from assistant designer Sebastian Pons, and from art dealer Detmar Blow, the widower of McQueen’s former mentor, Isabella Blow, as this elegantly constructed film outlines the biographical details. Full review/trailer TB

Drawing inspiration from an early version of the Pony Express established by Genghis Khan, the Mongol Derby, the world’s longest horserace, sends competitors across 1,000km of gruelling Mongolian terrain. Marloh’s documentary is formally conventional, but the story it tells is unendingly fascinating: heat stroke, bucking semi-wild horses, mad Irishmen, the odd broken neck. This is one of those uncomplicated documentaries on a fascinating subject that could generate a cult. Full review DC