Review: Apart from Anne Hathaway, the Ocean’s 8 cast barely qualify as characters at all 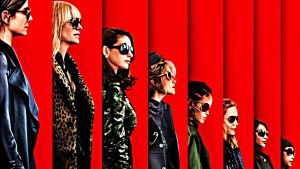 Ocean’s 8, like its predecessors, exists solely as a vessel for movie stars and celebrities

Have you noticed anything like the horrendous racist dogpile that was visited on the unfortunate Leslie Jones in the countdown to the female remake of Ghostbusters? Where is the outrage for the gender-swapped Ocean’s 8 movie?

Truth be told, even the biggest cry-baby MRAs aren’t going to assemble and rent their garments for the glossy, nothingy Oceans sequence.

The films, first conceived as a throwaway genre exercise for the Rat Pack in 1960, and then resurrected as a vehicle for George Clooney and chums at the turn of the millennium, may have fans, but even well-wishers can agree that the series (at its best) was handsome, vacuous nonsense.

Ocean’s 8, like its predecessors, exists solely as a vessel for movie stars and celebrities. A heist that takes in the Met Ball ensures that, in addition to the main cast, there are glimpses of Anna Wintour, Serena Williams, and Kim Kardashian.

With a nod to many lazy comic book characters, heroine Debbie Ocean (Bullock) is Danny Ocean’s sister. As the film opens, she has spent five years in jail having been stitched up by her ex-boyfriend, Claude (Armitage).

Turns out, that’s plenty of time to have planned a daring raid on the Toussaint, a $150 million Cartier necklace.

What follows has the manner of an unexcited kid. And then Debbie teams up with Cate Blanchett. And then Helena Bonham Carter. And then Rihanna. And so on.

The film rattles along, powered by costume changes, silliness and Bullock and Blanchett’s attempts to out-cool one another. There is a light smattering of decent lines (“Somewhere out there,” Debbie tells her team, “There’s an eight-year-old girl dreaming of becoming a criminal. You’re doing this for her.”)

In most other respects, however, nobody is trying awfully hard. Rihanna is Rihanna. Helena Bonham Carter’s Irish accent piddles uncontrollably between Belfast and Dublin and somewhere in America.

James Corden’s insurance investigator might as well have been called Inspector Afterthought. The filmmakers and the studio can’t decide if the film is called Eight or 8.

Anne Hathaway has fun as the spoiled A-list mark but the others barely qualify as characters at all. Where the Clooney films and the Sinatra movie radiated a sense of golf buddies, the quick-fire Ocean’s 8 gets in and gets out, leaving little or no time for banter.

There’s been far more evidence of camaraderie on the press tour and red carpet than we ever see in the film.

Still, as a canon entry, it’s an improvement on Ocean’s Thirteen.