‘Hereditary’ is a critical success, a box office smash. But do people actually like it?

Cinema-goers are flocking to the art-horror film ... then giving out about it afterwards 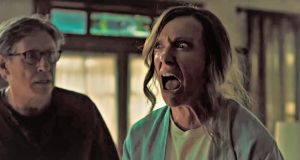 Gabriel Byrne and Tony Collettte in ‘Hereditary’, ‘a devastating portrait of an American family in sudden, inexplicable decline’

Everybody associated with Ari Aster’s Hereditary should be patting themselves vigorously on the back. Right?

After generating the noisiest buzz at the 2018 Sundance Film Festival, the disturbing, emotionally draining horror film has gone on to secure ecstatic reviews from practically every organ.

The Irish Times  joined The Guardian and Time Out in awarding the full constellation of five stars.

Big deal. Critics are forever lauding films that nobody goes to see. You can’t pay the gas bill with raves from the Minneapolis Star Tribune (four stars out of four from one Colin Covert, by the way).

Fret not. Hereditary hugely exceeded industry expectations by taking $13 million on its US opening weekend. That was the biggest ever opening for distributors A24, the company that released The Witch, Room and Ex Machina.

With a production budget of just $10 million, Hereditary is, even after publicity costs and exhibitors cuts, sure to make a tidy sum.

The film has generated a dozen think pieces. Once again, we’re being asked – following such films as Get Out, It Follows and A Quiet Place – if we’re enjoying a renaissance for intelligent horror. (There is always intelligent horror about, but it’s nice that people have noticed this time.)

Oscar maniacs have, a good eight months before the ceremony, marked Toni Colette, who plays a woman coping badly with bereavement, as a likely nominee for best actress.

There’s just one tiny problem. Nobody like the bleeding thing.

This is obviously not true, but one conspicuous measure does point towards that conclusion. The film has received a deadly “D+” from the CinemaScore market research firm. Calculated by polling audiences after they leave commercial screenings, CinemaScore ratings are now taken very seriously by exhibitors and distributors.

You might reasonably argue that a “D+” is not that bad. If Hereditary were sitting its Leaving Cert it would have come within a hair’s breadth of securing an honour. It passed. Yes?

In fact, the industry wonks worry if a film gets anything less than a “B”. A glance at the CinemaScore website puts the grade in perspective. Hereditary has the lowest rating of any film among “new” or “recent” releases. The cheap movie for kids, Sherlock Gnomes, the throwaway Super Troopers 2 and the poorly received Amy Schumer comedy I Feel Pretty each got a “B+”.

Book Club, that banged-together jalopy with Diane Keaton and Jane Fonda, actually managed an absurd “A-”. Hereditary achieved the remarkable feat of being, according to critical aggregator site Metacritic, both the best-reviewed film of the month and the least popular with CinemaScore.

What is going on? A lot of this is down to expectations. The more esoteric class of horror film often suffers the worst drubbing from CinemaScore respondents. Neither Robert Eggers’s The Witch nor Trey Edward Shults’s It Comes at Night fared well with those polled.

Speaking to The Irish Times last year, Shults acknowledged that the marketing had sold audiences a very different film from the steady, post-apocalyptic drama he actually made. Trailers suggested a crude orchestration of jump scares and bold shocks.

“Right now, I’ve made peace with it,” he told Tara Brady. “But if you had asked me a few weeks ago, I was worried about the way the movie was coming out into the world. I just knew it was going to be misunderstood.”

It is not altogether surprising if audiences reared on ghost-train rides such as Saw and The Conjuring find themselves annoyed when, despite trailers suggesting otherwise, a new release moves at a slower pace. If it does something odder than that then the responses can be incandescently negative.

Some of the 19 films filed in the “F” drawer really do belong: Neil La Bute’s remake of The Wicker Man, Uwe Boll’s video game adaptation Alone in the Dark. Some are only a little surprising: Jane Campion’s In the Cut was mad, but interesting.

Some cause heads to be scratched: surely, Steven Soderbergh’s Solaris wasn’t that hard to grasp. A few almost defy rational explanation. What on earth did Andrew Dominik’s Killing Them Softly, a fine crime flick starring Brad Pitt and James Gandolfini, do to offend so many people?

The answer again is to do with expectations. The three films mentioned above all have the outward shape of traditional genre pictures (detective drama, science-fiction adventure, gangster movie), but each stretches the boundaries of those genres into art-house territory. They do not rocket along. They sometimes deal in creative ambiguity. They allow morose open endings.

Though Hereditary belongs in that camp, you would have trouble arguing that A24 have been disingenuous in their marketing. The excellent trailer offers a reasonably honest suggestion of the grim, oppressive tone you will encounter in the film itself.

We must assume that – like A Quiet Place – the picture owes its excellent opening weekend to the consistently strong reviews. Yet those reviews swell with mentions of Ingmar Bergman (Aster lists Fanny and Alexander among his five favourite films), allusions to harrowing emotional breakdown and acknowledgment of the leisurely pacing.

Maybe nobody’s reading the damn things. Maybe they’re just looking at the star ratings. Such bald figures do little to convey the nuances of critical thinking. Similarly, the reductive CinemaScore can’t hope to convey the complex and varied reactions of audiences.

A glance at the short list of films scoring an “A+” reveals endless evangelical pabulum such as I Can Only Imagine, Soul Surfer and Miracles From Heaven. Hmm? I smell a ballot-stuffing, Bible-bashing rat.

Meanwhile, Nicolas Winding Refn’s Drive – a film almost everyone seems to like – languishes with a pretty awful “C-” I guess there wasn’t enough actual driving in it.