Kissing Candice: This is not the Dundalk you thought you knew

Review: ‘Things were better during the Troubles. Now the mad ones have the run of the place’ 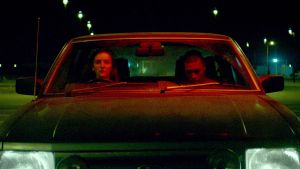 You imagine an audience – collective brow furrowed – craning in to catch the sense of Aoife McArdle’s stubbornly individual theatrical debut. Ricochets zing off the rocks as the plot refuses to take a linear route. Wisps of the nation’s awkward past hang over a landscape cratered by current discontents.

You’d expect that sort of thing from a film-maker who learnt her trade making videos for the likes of U2 and Bryan Ferry. The film is all rush and run. The inorganic noise and the near-abstract images dominate the hurried dialogue and tricky narrative.

Sometimes those images drift a little into art-house cliché: there’s a lot of boudoir red, and I may have spotted a burning dolls’ house. But it is to McArdle’s credit that Kissing Candice keeps asks questions worth disentangling.

The picture is set in an alternative version of an Irish border town. McArdle filmed mostly in Co Louth and, though we get a sense of that area’s maritime grit, Steve Annis’s photography spreads something a little like glamour about the place.

There’s a slickness, a sleepiness and a dreaminess to the film that sets it apart from so much dialogue-heavy Irish cinema. The word does not rule here.

In the throes of an epileptic seizure, Candice (Ann Skelly) imagines herself snuggling up to good-looking stranger Jacob (Ryan Lincoln). She seems to have fallen in love with a spectre. Then Jacob makes – I think – an appearance in what passes for the real world.

Somewhere between a surreal dystopia and a product of hard social-realism, the town is still in a buzz about the recent disappearance of young man named Caleb (Jason Cullen). The heroine’s father (John Lynch is always welcome), a police officer, can’t quite accommodate himself to new realities.

“Things were a lot better during the Troubles,” he says. “Now the mad ones have the run of the place.”

As the action careers, we become aware of a potential kidnapping; we are made to worry about gangland madness; we wonder if Aoife’s imaginings may actually be premonitions. This is not the Dundalk you thought you knew.

McArdle hangs a lot of responsibility on her actors, and each repays the compliment enthusiastically.

Much seen in the TV series Red Rock, Skelly has a focus and a sincerity that will propel her to ever greater success. Slipping over the dialogue with cautious precision, she gives a convincing impression of a sleepwalker who can’t decide if she’s dreaming the truth or actually living through a remembered dream.

Lincoln brings so much charm to his role that he almost warms the cool heart of a film that needs a few solid hugs.

McArdle was largely raised in Omagh – a town that suffered more than anywhere else – and, too obtuse to qualify as a character study, Kissing Candice is stuffed full of allusions to the traumas that plagued Northern Ireland towards the end of the last century. Shot on a smaller budget than some of her pop videos, it gets that across through a blast of incident whose confusions are intended.

Kissing Candice is sure to drive some viewers round the twist. One can rely on only so much indulgence from an audience and, as the picture goes on, its refusal to settle into a rhythm becomes irritating.

Uncertainty is something to be cherished in art. There is, however, a feeling here that stories worth telling have been squandered in a rush towards creative ambiguity.

‘My legs, stomach and solar plexus turned to jelly when Aretha Franklin started to sing’
4

When I think it won’t hurt too much, I imagine the children I will not have
6

Oliver Stone: ‘I realised the cocaine wasn’t helping my writing’
10