The idea that only kids should review children’s films is even sillier, writes Donald Clarke 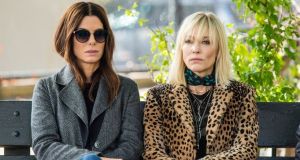 It has taken a while. But the conversation regarding lack of diversity in the movie industry has belatedly caught up with the critics. A recent report confirmed what we all knew: too few movie writers are women and too few are from ethnic minorities. That has to change.

That conversation has, however, kicked up a few more slippery, less sound arguments. Reports argue that the cast of Ocean’s 8 are blaming poor notices on male critics viewing – to quote star Cate Blanchett – that film through “a prism of misunderstanding”.

In an aside at the same press event, Sandra Bullock suggested that only those in any film’s target audience should review that film. “It would be nice if reviewers reflected who the film is for, like children should review children’s films, not a 60-year-old man”, she said.

This came a day after Brie Larson gave out about 40-year-old men reviewing Ava DuVernay’s A Wrinkle in Time.

The first argument can be tidied away quickly. I use the words “reports argue” because it’s not clear Blanchett and Bullock were trying to rationalise poor reviews for Ocean’s 8.

For a start, the film was received reasonably warmly. It currently has, on the review aggregator site Rotten Tomatoes, a “fresh” rating significantly higher than that for the “rotten” male-heavy Ocean’s Twelve.

Dig deeper and you find no significant disparity between the views of female and male critics. Indeed, the first four women listed on the “top critics” section of Rotten Tomatoes give Ocean’s 8 negative reviews.

Maybe Jia Tolentino of the New Yorker is looking through an altogether different “prism of misunderstanding” when she describes Ocean’s 8 as “a movie that mostly treats womanhood as something that’s both rigid and incidental”.

Blanchett’s response was to a question about whether Hollywood was getting better at telling stories about women. “It’s Hollywood but it’s also the media,” she said. “Because a studio can support a film and it’s the invisible faces on the internet, and often male reviewers, who can view it through a prism of misunderstanding, and so I think that is a really big part of the equation.”

La Blanch doesn’t really seem to be whinging about the response to Ocean’s 8. There is nonetheless an awkward generalisation at work that seeks to allow a blanket rebuttal to negative reviews from one section of society.

Jessica Kiang, who writes for The Playlist and Variety, remarked: “The wider point about men’s ‘prism of misunderstanding’ is … fallacious and leads us down the rabbit hole of believing there is one right single way to understand a film.”

Bullock’s position is less ambiguous. She argues that children should review children’s films. That’s what she said. Larson said something similar when discussing the recent, poorly received fantasy A Wrinkle in Time.

“I don’t need a 40-year-old white dude to tell me what didn’t work about A Wrinkle in Time,” she said. “It wasn’t made for him! I want to know what it meant to women of colour, biracial women, to teen women of colour.”

The logic dictates that she has no interest in hearing from middle-aged female critics either. Older people can just shut up about Ms DuVernay’s film.

“The ‘kids should review kids’ films’ argument is so banal I don’t know where to begin,” Guy Lodge of Variety tweeted in the aftermath of Bullock’s statement.

Not everybody likes every sort of film equally. Over time, the reader will tease out the reviewer’s preferences and blind spots

Almost every film critic and every arts editor on every newspaper has received puzzled letters from children when Hyram B Blowhard has said cruel things about the latest talking rabbit film. An editor at this newspaper once threatened to send a reply explaining that The Irish Times no longer paid children to clean its chimneys and it had no plans to reintroduce infant labour elsewhere. The actual reply was always less sarcastic.

When hiring a critic, newspapers seek a candidate who can write competently, has a decent knowledge of their subject and boasts a reasonable flexibility of taste. (I make none of these claims for myself. I argue merely that these are the criteria.)

Not everybody likes every sort of film equally. Over time, the reader will tease out the reviewer’s preferences and blind spots. If a 12-year-old measures up to those standards then – employment law allowing – by all mean sign him or her up for the New York Times or Sight and Sound.

If this rule were in place decades ago then Pauline Kael, late of the New Yorker, would not have been permitted to review ET and Dilys Powell, long a wise voice on the Sunday Times, would have been kept well away from Bambi.

Ms Bullock’s argument implies that reviews are little more than buyer’s guides compiled by consulting members of the target audience.

And who decides what constitutes “a children’s film”? One of the ‘kids should review kids’ films’ complaints we received concerned my review for a Pirates of the Caribbean movie. I may be wrong here, but I’m betting that Jerry Bruckheimer would be outraged if we argued that, as his films were clearly intended for children, we would send no reviewer over the age of 14.

The deep irony here is that this argument – align the reviewer to the intended demographic – has been used most savagely against female critics who have dared to dislike action movies, superhero flicks and other genres that idiots think are only for men.

Six years ago ago, Rotten Tomatoes suspended its comments section after a slew of misogynist barbs were directed at female critics unsure about The Dark Knight Rises. Stephanie Zacharek, who then wrote for Salon and now reviews for Time, was among those fielding the hateful gibberish.

“As you know and I know, Andrew, girls are not supposed to be allowed to review comic-book movies,” she said archly to Andrew O’Hehir when reviewing the first Dark Knight film on YouTube. The comments below confirmed that too many maniacs genuinely believed this to be true.

Those who, without immersing themselves deeply in comic-book lore, dare to dislike a superhero film are deemed to have done insufficient research. I still snigger at thoughts of those people who declared I was unqualified to review Deadpool the film because, well, I didn’t already like Deadpool the comic.

“just got back from the @deadpoolmovie, do us a favour & avoid reviewing any more comicbook movies You clearly don’t get it,” somebody said. “This article proves 2 things: 1) you know little about Deadpool. 2) You resist to accept some girls like Marvel,” somebody else said. 1) I’ve seen the film. 2) Nurse, the screens!

None of this should detract from the larger argument made by Bullock and Larson. Film writing remains a largely white, male preserve.

And let’s try and avoid sniping at folk because they’re 40 or they’re 60. That’s just not nice.