How ‘The Incredibles’ got a thrilling upgrade 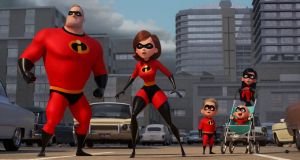 Now: In the sequel, the Parrs, a.k.a. Mr. Incredible, Elastigirl and their children, are set against a more layered background. Photograph: Disney/Pixar

Yes, Incredibles 2 features the same 1960s superhero family – Bob and Helen Parr, and their children, Violet, Dash and Jack-Jack – that thrilled audiences in 2004. But, boy, have they had a makeover.

The new film’s plot picks up where the first one left off (the family preparing to face down a villain named Underminer), but its visuals show just how technologically advanced computer-generated animation has become in the 14 years since the first film was a smash hit. The characters’ faces are more detailed, the action sequences more elaborate, the design richer and the settings more layered. It’s more like Incredibles 2.0.

Brad Bird, the writer-director of both movies, said these updates were a realization of his hopes for the original. “It was a miracle that we were able to finish the first film and get it as good as we got it,” he said. “Because every single thing that CG animation was bad at, that’s what our movie needed.” At the time digital animation was still struggling to render humans, hair, fire, water – basically the essentials of an Incredibles movie.

Here’s how three aspects of the “Incredibles” world were improved for the sequel.

For the first movie, the characters were sculptured in clay by the artist Kent Melton, who had done similar work on Disney characters for The Lion King, Aladdin and more. Back then, animators were not quite able to replicate the fine detail of Melton’s work in their computer models. “On this film,” Bird said, “we went back to the original sculpts and were able to get the characters exactly the way they were designed.”

One of the trickier characters was the brooding teenage daughter Violet. Bird had written her as insecure and hiding behind her long hair. But back then hair was very difficult to render. It took the animators six months of testing and tweaking, and the hair still didn’t look right. “They started asking me, ‘Does she need to have long hair?’” Bird said. “And I said, ‘Yes! That’s her character arc!’” They got her hair working correctly at the last minute.

In the sequel, Violet’s hair is flowing wonderfully, but there’s much more to it, and the characters in general. “It’s not just the way they look in a freeze frame,” Bird said. “It’s the way they are able to handle expression changes.” The latest software lets the film-makers build elaborate digital models, and can make skin move and respond in subtle ways, like a human’s would. “Then the animators test-drive these models the way a race car driver would test-drive a Ferrari, ” Bird said.

A bigger house (much bigger)

In the first movie, the Parrs were under cover, living a covert life in an unassuming suburban house. In the sequel, a tech tycoon brings them out of hiding and wants to make them revered, open superheroes again. He puts them up in a chic, midcentury-modern mansion, above, with waterfalls everywhere.

The production designer for both films, Ralph Eggleston, explained that the suburban home was “all about being boxed in; Bob’s den is at the bottom of the house, has no windows and is fairly small.” That house was imagined as 1,300 square feet. “It’s a reasonable size, but Bob is 6-foot-8. So it’s a little small for him.”

The new home is supposed to be a whopping 20,000 square feet. It’s still 1960s-style, but moved forward with fun bits of technology, like floors that move to reveal streams running through the living room. Its design was inspired by a trip the team made to Sunnylands, a sprawling estate in Palm Springs. But they put the Parr house on a precipice, “so that it looked like a rocket taking off,” Eggleston said.

In the original Incredibles, Bob, aka Mr Incredible, stops a train from flying off a broken track. The sequence is thrilling, but a scene that somewhat mirrors it in the sequel is downright eye-popping. This time it’s Helen (Elastigirl) saving a runaway train, and using all of her super skills to do so, including stretching to connect two pieces of a train and riding her shiny and amazing motorcycle (which divides in two) through the shimmering streets of the city, over rooftops with breathtaking pink-and-purple dusk skies in the background.

An animator who worked on the new sequence, Kureha Yokoo, explained that because Bird wanted something different for this scene, “we actively tried to stay away from looking at references from other films.” Instead they took cues from sports like motocross, water skiing and skateboarding, and mixed that with Helen’s stretching abilities. The action is bolstered by details such as sparks flying from the train tracks and smoke rising from the motorcycle tires. These touches, set against the skyscrapers and bustle of a metropolis, create an effect that is both hyperrealistic and otherworldly. – New York Times