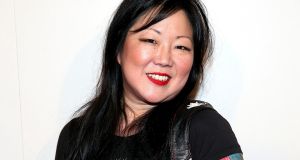 Margaret Cho: ‘This is a sad time for America’

Margaret Cho is sitting in her Los Angeles home. The five-time Grammy and Emmy nominee looks maybe half of her 51 years and is attended by a small devoted dog named Lucia Katharina Lawlor Cho. Lockdown has not been easy for the lively, outspoken comedian, actor, designer and singer-songwriter.

“This is a sad time for America,” she says. “It’s really difficult but it’s something we have to deal with. I haven’t done stand-up comedy for a while, which is really hard. But I’m here with my dog. And we’re safe.”

Cho first came to prominence as the quintessential 1990s stand-up heroine, a Joan Rivers for the grunge generation who took the world of comedy by storm at a moment when comedy was the “new rock’n’roll”. She was barely in her 20s when she featured on a Bob Hope special, became a regular on The Arsenio Hall Show and was the opening act for Jerry Seinfeld. Her no-holds-barred style has touched on race, bisexuality and the sexual abuse she experienced as a child. Recent tours have examined everything from menstruation to colonics.

“I think comedy is still the highest art form,” says Cho. “I’m glad I decided to be a comedian. I still love it even though I don’t have the ability to do it right now. It is both cheap therapy and a way to get paid. But it’s also good to figure out what to think about and how to think about things and then to think about things so that I can work out what I want to say to my actual therapist.”

Everything is riding on this election. We have a terrifying situation in America at the moment

“It’s so uncomfortable right now,” she says. “Ruth Bader Ginsburg is barely dead and we are doing the things that she did not want. Amy Coney Barrett is the worst person you could put forward for that job. And she could possibly sit on the supreme court for 50 years.

“It’s a worst-case scenario for women’s rights in America. We are looking at going backwards to the time before Roe v Wade. We’ll be living in The Handmaid’s Tale. I’m terrified for the future of America and American women.

“Everything is riding on this election. We have a terrifying situation in America at the moment. Of course the pandemic has made the world a very scary place in general. But we are also looking at a supreme court possibly overturning a lot of things they’ve been really important in terms of women’s rights, gay rights and immigration.

“Rodney King was in 1994 and we are still having the same conversations about race. And being queer or being a queer ally is very important and political right now. We want change. We need change.”

The fierce Cho isn’t necessarily the first person one thinks of when it comes to family entertainment, but she has a history with younger audiences and animation, having lent her voice to Pound Puppies, The Mr Peabody & Sherman Show and now Over the Moon, a major new release for Netflix’s ascendant cartoon catalogue. The very old-school fairytale musical from Disney veteran Glen Keane and Oscar-winner John Kahrs recasts the Chinese moon goddess Chang’e in a contemporary adventure about belief, bereavement and blended families.

“It’s an ancient story and it’s about family and about grief and loss,” says Cho. “But it’s also about saying goodbye and hello. I think it’s really beautiful and it’s great for kids of all ages. It’s a very old-fashioned classic story. I think people will love it. I’m really so excited to be a part of it.”

Arriving on heels of Searching and Crazy Rich Asians, Over the Moon is the latest studio film to feature an all-star Asian cast, including Cho, Ken Jeong, John Cho, Sandra Oh, and Hamilton’s Phillipa Soo.

“It’s incredible that we have an all Asian-American cast,” says Cho. “And the calibre of talent is really amazing. These people are such big stars. Everybody was so excited to be a part of this. So it’s a really special project and we’re proud to be in it. I think we are experiencing a moment of wanting to be seen and realising that we can be seen.”

Cho, of course, was seen earlier than most. Born in a Christian Korean family in San Francisco – her grandfather was a minister who ran an orphanage in Seoul – she largely grew up in the gay bookstore her parents bought when she was six. (Her first HBO Comedy half-hour features an impersonation of her old Korean mother asking: “What is ass master?”) Her father wrote joke books and a column for a Seoul-based newspaper. The family business was next door to the comedy club where Cho first took up a mic aged 15.

In 1992 she was cast in the short-lived Golden Girls spin-off The Golden Palace alongside Betty White, Rue McClanahan, Estelle Getty, Don Cheadle and Cheech Marin. She made TV history in 1994 as the title character of All-American Girl, a semi-autobiographical sitcom rooted in her stand-up routines, and the first primetime network show about an Asian-American family. Guest stars included Oprah Winfrey, Jack Black and Cho’s then boyfriend, Quentin Tarantino.

“Fortunately, I got pretty successful right away,” she recalls. “I was able to make a fairly good living as a stand-up comedian. By the age of 19, I was living on my own and I had my own apartment and a car. My parents were like: oh, she’s got a job now; I guess we have to be proud.

“So that was good. I do think I missed out on a lot of things. I do sometimes think I wish I had spent more time in school. I wish I had memories of spending time with kids my own age. Because from early on I was spending time with successful people who were a lot older than me. So I missed out on a lot. But that’s okay. Comedy is still the best decision I ever made in my life.”

It was weird to even bring questions of race up. It’s strange and disconcerting when you’re too early to the party

She’s delighted, she says, to be working at a moment when representation is a big deal.

“That was really hard to do. It was weird to even bring questions of race up. It’s strange and disconcerting when you’re too early to the party.”

She has subsequently worked with a wonderfully wacky array of talents, including directors Greg Araki (The Doom Generation) and John Woo (Face/Off), RuPaul Drag Race winner Bianca Del Rio (Hurricane Bianca), Cyndi Lauper and Debbie Harry (on the True Colours Tour), Awkwafina (Green Tea), and “Weird Al” Yankovic (on the Happy parody, Tacky). She has appeared on Sex & the City, cult animations Duck Man and Rick & Steve: The Happiest Gay Couple in All the World, and played Kim Jong-Il in an Emmy-nominated recurring role in 30 Rock.

Over the Moon is on Netflix from October 23rd

Review: Meryl Streep hasn’t had this much fun on screen since The Devil Wears Prada