The Trial of the Chicago 7: Plodding and pedantic reading of the 1968 riots

Review: The film fails to engage with the radicalism of Abbie Hoffman and Jerry Rubin 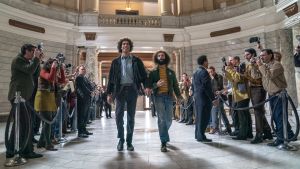 Film Title: The Trial of the Chicago 7

Among the many continuing irritations of the little-mourned The West Wing was its unflinching devotion to a class of smart-talking, smart-suited Ivy League spad. No episode was complete without Biff or Scooter spewing up an implausibly honed monologue rich with Latin tags or linguistic pedantry. If only America could be ruled solely by former presidents of the Harvard Law Review. A spadocracy, perhaps.

Netflix has now let Aaron Sorkin, perpetrator of that show, loose on the Chicago Seven and, though the film is never boring, it remains compromised by the writer-director’s devotion to the Law Review tendency.

Half a century ago, in a famous overreach, the Nixon administration encouraged the prosecution of eight individuals connected with disturbances at the 1968 Democratic National Convention. Despite the undeniable chaos of the event and the loose connections between leading protesters, the charge was conspiracy and incitement to riot. The case against Bobby Seale, co-founder of the Black Panthers, was dropped early on and the defendants came to be known as the Chicago Seven.

Anyone expecting a proper engagement with the radicalism of Abbie Hoffman, Jerry Rubin and Bobby Seale will . . . Well, anyone expecting that has almost certainly never endured a Sorkin joint. All the defendants get a turn at the microphone, but the film is interested in taking only Tom Hayden seriously. Two-thirds of the way through, played with pinched sobriety by Eddie Redmayne, the future congressman (and husband of Jane Fonda) suggests that later generations will view Rubin and Hoffman as frivolous figures.

“My problem is that for the next 50 years when people think of progressive politics they are going to think of you,” he says. “They are going to think of you and your idiot followers handing out daisies to soldiers and trying to levitate the Pentagon.” Better the man in the suit who stands for the racist judge and, already sounding like a presidential candidate, tells Hoffman that “if you don’t win the election it doesn’t matter what comes second”.

The Trial of the Chicago 7 official trailer

It certainly seems that Sorkin was at home to Hayden’s prophecy. The Trial of the Chicago 7 represents Hoffman and Rubin as holy clowns throughout. Sacha Baron Cohen, fighting a losing battle with the Massachusetts accent, can’t resist his comic impulses as Hoffman. As Rubin, Jeremy Strong (a breakout star from the TV series Succession) would be only marginally less at home in Rowan & Martin’s Laugh-In.

Few celebrations of a radical impulse have been so conciliatory to bourgeois convention. Sorkin makes sure that one decent prosecutor – Joseph Gordon-Levitt plays Richard Schultz – is there to humanise the establishment. Hayden reminds us that the cops have kids serving in Vietnam as well.

It hardly need be affirmed that the story returned to relevance this summer. If the film were shot a year later, Sorkin might have focused a little more closely on Seale’s story (you never know).

One undeniably shocking scene has the biased judge (Frank Langella in sonorous form) order Seale (Watchmen’s Yahya Abdul-Mateen II) to be bound and gagged after repeatedly attempting to represent himself. When somebody wonders if he can breathe, thoughts turn inevitably to the death of George Floyd.

For the most part, however, current political questions are merely referenced without being investigated. Nothing is allowed to interrupt the endless flow of SorkinSpeak. Some of this is superficially entertaining. Some of it lands with an offensive thud. “He had a dream. Now he’s got a f**king bullet in his head,” somebody says of Martin Luther King in words that an Oscar-winning screenwriter actually typed into a computer.

Sorkin the writer does, at least, have an identifiable style. Sorkin the director rarely gets the action moving above a dutiful plod. Everyone looks to be have been costumed from the kids’ dress-up box. The camera fails to make riots look riotous. The less said about the appallingly sentimental final scene the soonest we can remove our fists from our embarrassed mouths. It makes it all the more excruciating that the sequence is making a hash of something that really did happen.

Man, what a bummer.