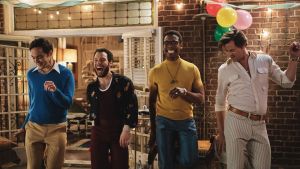 Film Title: The Boys in the Band

The Boys in the Band, Mart Crowley’s groundbreaking Broadway play about half a dozen gay Manhattanites, was a radical piece of theatre when it premiered in 1968. It was revived and well reviewed in 2018 for its 50th anniversary. The all-gay cast – including Jim Parsons and Zachary Quinto – of that production have now been transferred to Netflix by TV impresario Ryan Murphy as part of his $300 million deal with the streaming service.

The set-up could not be more contrived. A group of bohemian friends converge to mark the birthday of hilariously caustic ad man Harold (a mesmerisingly ostentatious Quinto). Michael (a career-best turn from Parsons), the equally bitchy host, welcomes the newly out Hank (Tuc Watkins), who has left his wife and kids for the promiscuous Larry (Andrew Rannells). Matt Bomer is Donald, a good-looking occasional hook-up for Michael. Bernard (Michael Benjamin Washington) is quiet and circumspect; Emory (Robin de Jesús), a flaming designer, is anything but. He brings along a dopey “midnight cowboy” as a birthday gift for Harold.

The Boys in the Band official trailer

The evening is complicated by a stream of bitchy invective and a straight gatecrasher – Alan (Brian Hutchinson), Michael’s former college roommate, arrives uninvited, and he is both horrified and transfixed by the queerness. He even rushes at Emory for being the most “pansy” of the group. Finally, in a horrific new spin on the wise dictum “don’t drink and dial”, Michael dares the room to telephone their true loves to profess. Hissy, entertaining psychodrama ensues.

That The Boys in the Band is theatrical and dated is precisely the point. This is high period camp, lovingly curated and displayed. It’s not merely a snapshot of pre-Stonewall, pre-Aids-era homosexuality; it’s a snapshot of how one plucky writer thought to represent his community.

A terrific ensemble cast spit out one-liners (“That’s the pot calling the kettle beige”), tear each other down for quoting Judy Garland (who inspired the original play’s title) and – for Harold and Michael – slip effortlessly into self-loathing.

The former purrs from under his sideburns: “I’m a 32-year-old ugly, pockmarked Jew fairy.” The latter trades in cruel zingers and ideas as a defence against lapsed Catholicism and a receding hairline.    On Netflix from September 30th