Rialto, The Boys in the Band, Eternal Beauty, The Trial of the Chicago 7 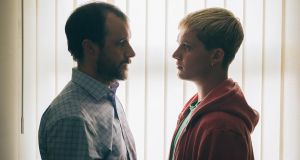 RIALTO ★★★★☆
Directed by Peter Mackie Burns. Starring Tom Vaughan-Lawlor, Tom Glynn-Carney, Monica Dolan, Sophie Jo Wasson, Scott Graham, Michael Smiley, Deirdre Donnelly, Eileen Walsh. 16 cert, general release, 90 min
Job had nothing on Colm (Vaughan-Lawlor). His dad has just died. He is being made redundant. His son hates his guts. The story kicks off with Colm picking up a young hustler and paying him for sex, but that relationship brings little you could define as joy. Adapted by Mark O’Halloran from his play Trade, Rialto is an unrelenting study in urban despair. But the integrity of the writing and the sincerity of Vaughan-Lawlor’s performance elevates it above its mulch of misery. Scenes will stay with you forever (whether you like it or not). DC

Mart Crowley’s ground-breaking Broadway play about half a dozen gay Manhattanite was a radical piece of theatre when it premiered in 1968. The acclaimed 50th anniversary production has now been transferred to Netflix by producer Ryan Murphy with an all-gay cast. That The Boys in the Band is theatrical and dated is precisely the point. This is high period camp, lovingly curated and displayed. It’s not merely a snapshot of pre-Stonewall, pre-Aids era homosexuality; it’s a snapshot of how one plucky writer thought to represent his community. TB

Imagine Polanski’s Repulsion played for laughs. No? Well, happily, writer-director Roberts has done the heavy lifting for you. The actor-turned-filmmaker reunites with former Submarine co-star Hawkins for this nuanced, darkly comic portrait of paranoid schizophrenia. Jane is on the margins of a family that prompts one to rejig the opening to Tolstoy’s Anna Karenina: “Happy families are all alike; every mean family is mean in its own way.” A terrific ensemble ensures that the heroine’s misfortune is enlivened by sly digs and, occasionally, raucous joy. TB

Sorkin has been let loose on the story of the radicals – Abbie Hoffman, Jerry Rubin, Tom Hayden, Bobby Seale among them – charged with conspiracy following disturbances at the 1968 Democratic National Convention. As expected, the film ends up a celebration of the sort of sharp-suited Ivy League spad that Sorkin worshipped in The West Wing. Figures such as Hoffman (Cohen) and Rubin (Strong) are played as comedy turns, whereas Redmayne’s more conventional Hayden is treated with conspicuous respect. It’s never boring, but it is bogus, compromised and sentimental. DC