The writer has adapted his own Irish Times Theatre Award-winning play for the screen, and it wasn’t easy 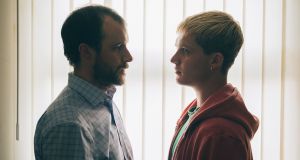 Let’s avoid spoilers and specifics. But there comes a moment late in Rialto, the new film from Daphne director Peter Mackie Burns, when the troubled protagonist says something so shocking to his adult son that this viewer found herself flinching for days after the final credits rolled.

It’s bad. I don’t even have to explain the quote I mean to Mark O’Halloran, who wrote the screenplay. He knows.

“It’s very bad,” agrees the actor and writer. “Even when I was writing it I got up from my desk and said: Oh my God, that’s terrible. I was giving out to myself. It’s so dark. But I was also really interested in the idea of someone who feels that they don’t love their children. I think it’s all about him feeling inadequate as a parent and he’s trying to push his kid away.”

He laughs. “But it’s pretty bad. When I was writing it, I wanted to write it right to the edge. Sometimes you just want to push your characters off a cliff.”

Even before lockdown pushed back its release date, Rialto has had a long and fascinating journey to the big screen. In 2015, before Mackie Burns came onboard – fresh from the much-admired Daphne, another collaboration with Irish actor Tom Vaughn-Lawlor – Lilting film-maker Hong Khaou was attached. The latter departed the project after he received funding for his own script, Monsoon, which was (coincidentally) released last week.

Rialto, named for the Dublin district, and not, despite its 2019 premiere at the Venice Film Festival, that city’s commercial centre – is based on Trade, O’Halloran’s Irish Times Theatre Award-winning play. That two-hander – in which a confused young rent boy talks to a middle-aged client – premiered in Dublin’s 2011 Fringe Festival. Expanding the project into a movie was not, says its author, an insignificant task.

“It is a bit odd because when something is complete and you feel it’s complete and you’ve shown it to an audience, it’s strange to bring it back,” says O’Halloran. “I think when I tried to do a straight first draft, I found that the ending wasn’t quite working. There were things that were tiny little flaws in the play but when the story was expanded, they became big flaws. And there were practical things. The son and daughter who are alluded to in the play had to be fleshed out into characters. The language had to change because even though there’s theatricality in everything I do, films that come from theatre very often sound like they come from theatre. It wasn’t the easiest thing.

“I think adaptations are weird when you’re adapting your own work. I’m not surprised that loads of writers hand over the adaptation of their own work to somebody else. Because they realise that they have to unpick everything they have done. And you might be too close to a project to take the genuine opportunities that it offers you. But that’s all in a day’s work.”

Rialto opens three weeks after the married Colm (Tom Vaughn-Lawlor) has lost his father. Despite a loyal wife (brilliantly played by Monica Dolan) and a settled family with two older teenage children (Sophie Jo Wasson, Scott Graham) Colm’s misery is compounded when he loses his managerial post in Dublin’s docklands. A chance encounter with a 19-year-old rent boy (Dunkirk’s Tom Glynn-Carney) seems to signal an emotional connection – or the start of a downward spiral.

Although the script is rooted in material that is almost a decade old, the film offers a very voguish 2020 grapple with toxic masculinity.

“There’s something about men and their sense of dislocation and loneliness,” says O’Halloran. “They can become dangerous to everybody else around them because that becomes the defining feature of their lives. And then everybody else’s lives in the household. So I was interested in that. I think if his wife was going through that crisis it wouldn’t sink the family the way his crisis does.”

Despite Rialto’s obvious LGBTQ themes, these are incidental to the final film. It is, to circle back to Halloran’s proclivity to push his characters from a cliff, darker than a question of repressed sexual desires.

“I didn’t want to write a gay play as such or a play about gay issues,” insists O’Halloran. “What I was after was a man whose identity is so delicate he disappears. He loses his identity because he’s not able to stand up for himself. I think he is someone who could be anything. He allows himself to believe that he has fallen in love with this boy because someone is listening to him.”

O’Halloran, who grew up in a family of 10 children in Ennis, became an overnight sensation in 2004 when he wrote and starred in Adam & Paul, a tragi-comedy concerning two Dublin drug addicts. That marked the first of several collaborations with future Oscar nominee and Normal People director Lenny Abrahamson. Garage, the pair’s portrait of a small-town loner starring Pat Shortt, won the Art Cinema award at the Cannes Film Festival. Prosperity, a 2007 four-part series, won more silverware and offered a humane representation of Irish life on the margins.

O’Halloran and Abrahamson have various projects in development – O’Halloran is invariably the busiest of showbusiness bees – including the next Sally Rooney project. It has been a busy lockdown.

“I got a lot of writing done, which was kind of groovy,” he says.  “I’m adapting a John Boyne book for American television. It’s a big, big story. But I can tell you because John has already posted all about it on Twitter. And Conversations with Friends [the film version of the Sally Rooney novel] is ongoing. We are in rewrite territory and heading towards production at the end of this year or the start of next year.”

He is even more prolific as an actor. He’ll soon feature alongside Patrick Dempsey and Laia Costa in the sleek Devils, a major new Sky series about a worldwide financial conspiracy uncovered by a group of traders of a large investment bank. He continues to gamely pop up in a variety of short films, including Antonia Campbell-Hughes’ Acre Fall Between. Last year he starred in Shane Meadows’s much-admired (and harrowing) four-part series The Virtues.

“He’s such a brilliant, brilliant man,” he says of Meadows. “Working with him as an actor is kind of amazing because he wants you to go to new places. He pushes you to take everything to the maximum and to get to the truth. It was unpredictable as well because you’d be ready to do a scene and suddenly everything will change. He’ll say we’re doing something else because the energy on set is right for something else. So you have to stay on your toes. It was one of the best experiences I’ve ever had.

“Stephen Graham is one of the most extraordinary actors of his generation and a kind, generous actor, too, who gives you space. And then Shane came over to Dublin and showed Helen Behan and Niamh Algar and myself all the episodes. We were all absolutely exhausted at the end of it. Jesus, Mary and Joseph. I think the female roles are f**king amazing. Where else would you find roles like that for women?”

A jolly and personable presence, it can be hard to reconcile the real-world O’Halloran with his dark materials, as both a writer and an actor. Post-Rialto, he says, things will be different.

“I think I’ve gone as dark as I’m going to go. I don’t want to keep writing endlessly dark things. No one is getting pushed off a cliff in the next one. They might walk along the cliff for a while. But they’ll get home safely at the end of it.”

Rialto is on release on October 2nd