The Climb: An indie, buddy comedy that is a love letter to French cinema 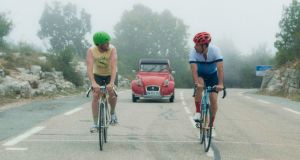 James Bond – and his unlovely promotional posters for No Time to Die – has hightailed it toward an April release date, leaving smaller (and almost certainly better) movies with a dilemma: to release or not to release.

That’s the question facing The Climb. A funny, clever indie comedy that concerns road racing, male friendship, and fluctuating weight, The Climb is the sort of film that is typically jollied along by word-of-mouth and trailers paired with bigger movies such as, well, No Time to Die.

The reviews have been been almost universally ecstatic. It’s “... thrilling and charming in a way that very few comedies ever are… one of the great movies of 2020,” says Nick Allen at Roger Ebert. “An endearing, relentlessly funny buddy comedy,” writes Caroline Tsai at The Playlist. “Beautifully written and performed by the director and real-life best pal Kyle Marvin, [Michael] Covino’s film gets precisely the balance of dependency and denial that keeps a bad bromance afloat.”

Co-writerr and co-star Kyle Marvin is still growing accustomed to positive notices that frame The Climb as a bromance or a tale of toxic masculine friendship. He’s a little happier with the “arthouse Stepbrothers” tag. “I’ll take that,” he says. “I think that’s a really flattering description. I think – for us – we didn’t ever intend to make something that specific. We just wanted to make a great film that we wanted to watch.

The Climb is the latest film to be written, financed, produced and performed by Marvin and Michael Angelo Covino. The pair have worked together, in various capacities, on a variety of projects over the past decade.

“We’ve worked together for 10 years,” says Marvin. “We met in New York and ran a commercial production company together.  I have written and produced for him and he’s produced for me and we’ve done all sorts of stuff together. So it’s very fluid. I came into film sideways. I am a big fan of cinema. But I was working in advertising and trying to raise a family. And film is not an easy industry to break into. But after all these years in commercial production, we’re very familiar with all aspects of filmmaking.”

The Climb starts as it means to go on: with a breathtaking single take defined by comic and emotional heft. Shot near Cannes, where the film would ultimately screen as part of Un Certain Regard, the opening gambit sees main characters Kyle and Mike – the writers and actors used their own names as a talking point – biking uphill. Kyle, who gained weight for the sequence, huffs and puffs after his chum announces that he has slept with Kyle’s fiancee.

Every subsequent scene is similarly crafted to take in big moments in the duo’s unhealthy friendship, replete with an Altmanesque sweep of overlapping dialogue and the elaborate camerawork of DOP Zach Kuperstein (The Eyes of My Mother).

“We were very inspired by French cinema,” says Marvin. “We were to consuming a tremendous amount of French cinema in particular as we were writing. Because they do this thing so well – especially in the New Wave – of cutting to the chase. Nobody whispers I love you or sneaks around. It’s like everybody is already sitting at the table and a guest announces: you guys are married but we’re going to be together. So we wanted to make a movie with those kind of rash choices. Even the colour palette we chose is very 1970s and French.”

The French responded to this love letter in kind. The Climb won the Jury Coup de Coeur at Un Certain Regard and won again at the Deauville Film Festival, where Michael Covino took home the Jury Prize.

That’s rather typical of the reception afforded the film on the festival circuit. An earlier short version was nominated in the best short category at Sundance 2018 and the Independent Spirit Awards. To date, the feature has played at Cannes, Toronto, London, Telluride and Sundance. Oddly, it played twice at South By Southwest: an early cut featuring makeweight title cards and voiceover was programmed in 2018. The final cut played a year later.

“It was a wild ride,” recalls Marvin. “We were at Sundance with the short in January. We had no script when we pitched it as a feature at Sundance. But we found our financiers and by April we had the script done. In August we were in preproduction and we started shooting in September. Believe it or not, we were trying to get to Sundance for next year but that was hindered by winter as a third of the film takes place in winter and winter didn’t come to New York that year.

“Getting into Cannes was surreal. Cannes is the gold standard for cinema. We sent a Blu-ray in the mail to France. In the post. And then we got a phone call saying congratulations.”

The Climb is released October 23rd