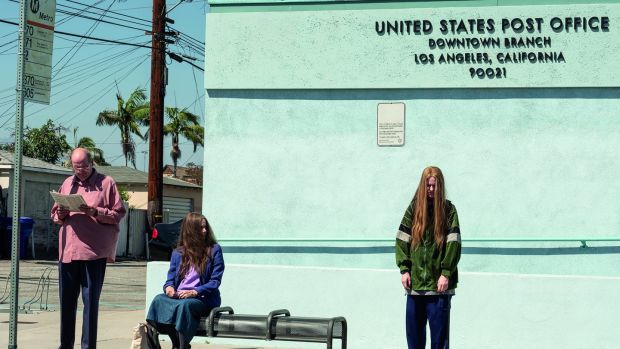 Over the past two decades or so, Miranda July, Californian multi-hyphenate, has been dividing audiences with her films, stories and performance pieces. For every devoted fan there is an unconverted sceptic bristling at her perceived tweeness.

It would be pushing it to suggest that Kajillionaire will win over all her enemies. We wouldn’t dare insult her by using the word “accessible” (at least not without placing it within inverted commas). But the film is more aware of its own oddness than were The Future, and Me and You and Everyone We Know, July’s first two features.

Indeed, when Gina Rodriguez arrives on screen as the spirited Melanie, Kajillionaire seems to wake up to the virtues of relative normality.

This is the first “eyes of the audience” character that July has created. To that point, we are in the slippery hands of the oddball Dynes family. Purely by accident – the script was conceived years ago – July has wandered into the arthouse genre of the moment.

Like Shoplifters and Parasite, last two winners of the Palme d’Or at Cannes, Kajillionaire concerns itself with a family of inveterate grifters. Richard Jenkins, harried and short-tempered, and Debra Winger, remote and neurotic, play Robert and Theresa Dyne. Evan Rachel Wood, as their daughter Old Dolio (the name is explained), essays a latter-day Dickensian cutpurse as their daughter.

The scams are mostly petty. They sometimes don’t come off. They rarely deliver high yields. Old Dolio works her hand through one post-office box to steal contents from the neighbouring slot. They fake the loss of luggage to claim airline insurance. They sell people back their own property. There is little outlaw glamour here.

The Dickensian atmosphere is heightened by layers of comic decoration. The family live next to a “bubble factory” (I’m not sure either) that leaks pink foam into their apartment on a daily basis. Phiz would have greatly enjoyed illustrating their labours with oozing buckets.

But the director’s visual choices press home another aesthetic. Both mother and daughter wear their hair in the long, drooping style of cult members. Their make-up is similarly sparse. Their buttoned-down movements suggest the fearful consequences of being bottled up too long with a robed Great Leader.

It is a mistake to draw too many sociological lessons from July’s off-beat dramas. She approaches society at her own oblique angle. But something is surely being said here about the potential tyranny in all families (cults of a sort). Mum and dad have done for the daughter with petty crime just as more conventional families do for theirs with private schools and social conditioning. As Philip Larkin would no doubt conclude, they may not mean to, but they do.

The dynamic changes when the family somehow make friends with Melanie. There has never been a moment like this before in a July film. The amusing, fun-loving character doesn’t exactly call out the film’s arch leanings, but her mere presence reminds us of a world less at home to LA art-world gestures.

Rodriguez brings warmth to a film that, despite the southern Californian setting, had hitherto been shivering in emotional froideur. Old Dolio is initially jealous of the interloper, but the two young women soon discover a bond.

The final third of the film is something of a marvel. One might reasonably worry about casting a person of colour as, yet again, the emotionally open free spirit who loosens the uptight white characters’ bounds. But, profiting from improvisation with a clever cast, July delivers closing scenes that flesh out the two younger women while embracing wider sadness about the human condition. It’s easy to make allowances when the film is otherwise so true to itself and its characters.

July has made her best feature. Four fine actors (how nice to see Winger back, even if she is scarcely recognisable) make the most of tricky, slippery material. On out-there triumph.