His father built up Galtee cheese, and his first job was designing a piggery: now 95, the unassuming Irish ‘starchitect’ focuses on the small problems, such as where you hang your coat 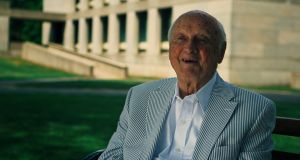 Kevin Roche: ‘I still don’t think architecture pays enough attention to the user, to the person who has to live in the building’ 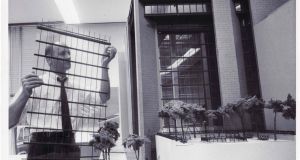 Kevin Roche: The Quiet Architect is a new documentary about the Irish man and his work

It’s mid-morning in Hamden, Connecticut and Kevin Roche is in the offices of Kevin Roche John Dinkeloo and Associates LLC (KRJDA), the firm he co-founded in 1966.

Now aged 95, the starchitect behind some 38 corporate headquarters, seven research facilities, various theatres, at least one zoo, museums including the Museum of Jewish Heritage and the Islamic Wing at NY’s Metropolitan Museum of Art, has scaled back to a four-day week.

In a new documentary about Roche and his work, called Kevin Roche: The Quiet Architect, he scoffs at the idea of retreating to a golf course: “The worst thing you could do is retire,” he tells filmmaker and former architecture student Mark Noonan.

Roche has been characterised by the New York Times as “an architect of big gestures”. His vast campus for the Ciudad Grupo Santander headquarters includes a 2,000-seater auditorium and a 100,000-metre green roof, and as he recalls, “required 12,000 labourers over 12,000 hours”. His CV includes headquarters for John Deere, General Foods, the Knights of Columbus, and Dai-ichi Life.

Yet Roche (in common with many of his peers) prefers to think of himself as a “problem-solver”.

In The Quiet Architect he frequently comes across as a kind of gumshoe figure inquiring after daily practicalities. Where do you hang your coat at your cubicle? And is there space to store your bag?

“On occasion, there’s a big gesture, and that’s okay,” he says. “But I’m basically a problem-solving construction guy.”

Eamon Kevin Roche was born in Dublin in 1922, but grew up on a farm in Mitchelstown, Co Cork. “At the time after Ireland was seeking independence, my father fought on the Republican side and spent time in jail. I was born when he was in jail. So my mother was kind of destitute, and I was born over her sister’s shop. When he got out of jail, my father took a job in a creamery. Typical for him, he took over the neighbouring creamery within a year. And then he got into the cheese business. Does it still exist? Galtee cheese?”

Roche Snr soon reasoned that the leftover whey would make for fat pigs, and Kevin, who used to apprentice himself around the farm after school, landed his first architectural job: designing a piggery for the farm’s new porcine arrivals.

“I designed it. And supervised the building of it. I had the men building a wall. I think they thought: ‘Oh, boss’s son; we’ll humour him.’ And I kept telling them to go higher. And of course it all came down. And all you can hear is muttering: ‘F**king eejit.’ But I learned a lot building that piggery. And I had a good time building it. So that’s what got me interested. I think I got a little bit better at it since.”

Architects don’t always take into account how people find their way around, or how a building fits into environment, or how it can make people happy

Roche cannot remember “passing a single thing” while at school with the Christian Brothers. He did rather better, however, reading architecture at University College Dublin in the mid-1940s.

“Luckily, I got on very well at university and I graduated head of the class. So I figured it must be the right thing to do.”

Roche’s earliest mentors were the new, stark modernists. He worked with Dublin architect Michael Scott on Donnybrook bus garage, and later relocated to London to work for Maxwell Fry.

“Michael Scott had just a small office at that time,” says Roche. “And one of the first big jobs was Busáras. The leading architects of the time were in London. So I was with Maxwell Fry for nine months. It was another small office. And they were very generous considering I hadn’t been in the war and the five other guys were all ex-RAF. They never raised the question: why the hell weren’t you there? They were very good architects who went on to some great work. Then I read in an architectural magazine about Ludwig Mies van der Rohe being the greatest architect. So I thought, I have to study with him.”

Roche’s father somehow – he has no idea how – managed to get his hands on $500 (“because Irish money was worthless at the time”). At the embassy, the chap behind the counter encouraged the young student to take a green card because he had “a bunch of them”. And thus, in 1948, Kevin set off for the Illinois Institute of Technology to study under Ludwig Mies van der Rohe.

“Mies only said one thing to me,” says Roche with a laugh. “We were asked to design a house and it was snowing in Chicago. It’s a place that gets three or four months of snow a year. So I drew a pitch roof. And Mies looked at it – my design – and said: ‘You could do that you know, but I would not’. That was the extent of his teaching.”

Excited by the building of the United Nations headquarters, and the “idea that people would stop fighting one another”, Roche relocated to New York “not really knowing what the hell I was doing”. He joined Eero Saarinen’s firm in 1950, and swiftly became a senior designer. It was in the Saarinen office that Roche met John Dinkeloo, with whom he would later found KRJDA.

Saarinen died suddenly aged 51, leaving several major projects unfinished, notably the TWA Terminal at Kennedy International Airport, the CBS Building in New York, and Dulles Airport in Washington. Within four years, Roche and Dinkerloo had delivered these buildings and Roche struck out on his own, with the Oakland Museum in California, a structure defined by a walled garden, which was completed in 1964.

The headquarters for the Ford Foundation in New York City, built around a public atrium, were finished soon after. These modernist shapes, tempered by glass, light, and greenery, set Roche’s buildings apart from the more austere school of his aesthetic forebears and established the tone for his future creations.

Roche has been around long enough to see some of these creations altered, including his big block limestone and glass construction for Welseyian University. Others, notably the New Haven Veterans Memorial Coliseum, have been demolished.

“It was a very important building,” he says. “But when the mayor – who happened to be Irish – retired, the opposition party blew it up the first opportunity they got. I can’t complain. I’ve had great successes. We’ve built many, many corporate headquarters. A lot of very large projects all over the world.”

When Kevin Roche was presented with the Pritzker Architecture Prize – a handsome $100,000 purse and a gong that is frequently characterised as the Nobel Prize for architecture – his acceptance speech made reference to a rather unflattering letter received from a woman in Las Vegas. “I think the members of the Pritzker Committee must be out of their minds,” she wrote, “To honour, in the year 1982, an architect who is designing in glass and masonry/steel. Such energy wasters are dated, old, dull and boring.”

It’s typical of his self-deprecating personality that he saw fit to include such remarks: “It was all luck, really,” he insists. “I just happened to be in the right place at the right time.”

He has, tellingly, never forgotten the time he was a “f**king eejit”, nor when one of his earliest designs for a spiral staircase were met with “You’d never get a coffin down those stairs”, nor the time a builder, working on one of his more intricate projects asked him: “How am I supposed to build this Swiss watch?”

“I still don’t think architecture pays enough attention to the user, to the person who has to live in the building,” he says. “They don’t get nearly enough consideration. Because they’re the person who has to live or work in or worship in or whatever in the building. Architects don’t always take into account how people find their way around, or how a building fits into environment, or how it can make people happy.

Kevin Roche: The Quiet Architect is out now

Kevin Roche can’t name his favourite project: “As I always say, you can’t pick between your children.” And he ought to know: he and his wife Jane have five children and 15 grandchildren. He can, however, name the most problematic building of his career: the Convention Centre in Dublin, his only Irish construction. “The Irish government wanted a convention centre pretty much for free,” notes a dismayed colleague in Mark Noonan’s film. “There were so many government agencies and none of them seemed to be talking to each other,” says Roche. “You couldn’t get a straight story out of any of them. It was by far the most difficult time. We had never come across anything like it. They’ll probably blow it up when they get a chance.”