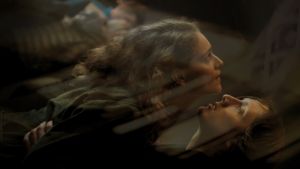 Despite the Night: an experience few will want to share with their maiden aunt

Film Title: Despite the Night

In fact Grandrieux, now in his 60s, has been at this creative filth for decades. We doff our chapeaux to him. It takes some determination to retain these levels of pretension into retirement age.

Reviews of earlier Grandrieux films have made much use of the phrase “no synopsis is possible”. But Despite the Night does have something a little like a story. Lenz (Kristian Marr) travels to Paris in search of Madeline, a former lover, and gets lured into relationships with the mysterious Hélène (Ariane Labed), a sex worker, and Lena (Roxane Mesquida), an artist. You know how it is with these things. Nobody works at the post office or pulls pints for a living.

The irony is that, for all the film’s striving towards oddness, it inevitably reminds us of other, less gruelling experimental film-makers (some influenced by Grandrieux, to be fair). The party scene suggests the later, dreadful work of Terrence Malick. The smoky Parisian skies make one yearn for Claire Denis.

Most of all, however, Despite the Night suggests Gaspar Noé functioning on power-save mode. The transgression is all there. Snuff movies and rape sequences combine with apparently consensual threesomes to create an experience few will want to share with their maiden aunt.

And yet. What infuriates most is the brilliance of so many images. We open with a bewitching, glassy sequence in which abstracted voices provide background for the interaction of blasted-out faces. The closing horror is filmed with a formal authority that draws the eye inexorably towards the centre of the unlovely screen.

These individual triumphs do not, however, mesh together convincingly. They belong on the wall of a gallery. Viewers would then be free to savour the accomplishments and, just as important, walk away when it all becomes too much.