The strange, true story of Ghana's modern-day camps for witches

For her new film, Rungano Nyoni spent more than a month in a real-life witch camp, that works as a tourist attraction, labour camp and women’s refuge 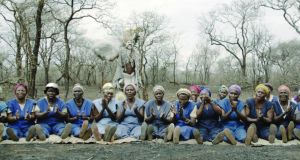 “It’s just like a regular village but it’s a village of older women.” Above, still from I Am Not a Witch

I Am Not a Witch, the transfixing, audacious debut feature from the Zambian-born Welsh director Rungano Nyoni, opens as Zambian villagers surround a bemused police official. The cause of their collective consternation is Shula (Maggie Mulubwa), a mute orphan accused by her community of witchcraft: one local alleges the girl has chopped off his arm with an axe. (Somehow said limb remains visibly, stubbornly attached.)

The girl is soon taken away by a government official, enrolled in a so-called witch camp, and used to help solve crimes. A long white ribbon is attached to her back to prevent her from escaping.

“It’s a visual way of representing something that happens in real life,” says the film’s writer-director. “The women are usually controlled through magic potions or, in the witch camps in Ghana, through an invisible shrine. They can’t leave the camp without permission. And the shrine stops them from flying at night, so that protects the local villages from them. There are lots of rules about the shrine. One, conveniently enough, is that only a witch doctor can see it.”

“Zambia is full of this kind of stuff,” she says, laughing. “So many weird things happen there. I met this chieftain who was renowned for catching witches. And he catches them with these hoodoo trinkets made with feathers and vials or blood and chicken bones. But these things are so intricate. There’s months of effort there. In Zambia, there’s modernity and the internet. And yet there’s talk of witchcraft.”

While researching her screenplay, Nyoni spent more than a month in one of Ghana’s real-life witch camps, villages that simultaneously function as tourist attractions, labour camps and women’s refuges. Grandchildren and tour buses can visit. The women are permitted to go to church, but they are still forced to work in the fields for local chiefs.

“It’s just like a regular village but it’s a village of older women,” says Nyoni. “They all live together. The local chief will allow them to stay and they’ll plough the land in return.”

Many of the women she met at the Ghana settlement were 70 or older. There remains a stigma around the idea of old-age homes, says Nyoni, so the camps are a place for that constituency. But that alone doesn’t account for the witch camp phenomenon.

“There are different reasons as to why they ended up there. When I asked them why they had been accused, many seemed to think it was jealousy. Some of them had started a business in their village and then when the business did well, the accusations followed. A lot of them were widows. And when you’re a widow you’re quite vulnerable in certain places. If a family member accuses you, then they can take your house. I met this one woman who said: ‘We’re women and we’re the weaker people; that’s why we are here.’ That’s the best explanation. It’s oppression. It happens to the most vulnerable people.”

Nyoni saw almost 1,000 children before she settled on Maggie Mulubwa to play the lead. The director’s French husband had earlier photographed Mulubwa in northern Zambia so they contacted the local chief, who sent a WhatsApp to all his people covering thousands of kilometres until they found the eight-year-old Spongebob Squarepants fan.

Following the shoot, Nyoni set up a GoFundMe page for Maggie’s education; the British Film Institute and Film4 have backed it.

“She had never been to school,” says Nyoni. “This production allowed her to go. She only spoke Bemba and now she speaks English fluently. You can’t stop her from talking in English. She had it down in six months. She learned how to read and write ... She’s like an old soul because she’s worked for years. You have to remind yourself that she’s seen everything and yet nothing.”

As Nyoni notes, the WhatsApp search for a star is emblematic of Zambia’s many inconsistencies. It is illegal to accuse someone of witchcraft and yet such accusations do occur, whereupon local chieftains step in, and government officials turn a blind eye.

“There are so many contradictions in Zambia,” she says. “My tribe is matriarchal. So I always get these questions at home about being a woman director, but never in Zambia, because all the directors I know there are women. It’s not that they don’t have misogyny there. It’s just a different kind of misogynist society. It has ideas about how women should be and behave. But it’s not a society that precludes women from working.”

Nyoni was nine when she moved from Zambia to Cardiff, where her mother was enrolled in university. The two cultures, she says, have more in common than you might think.

“I remember arriving. I didn’t even notice there were loads of white people. The sense of humour is not dissimilar; they’re both laidback places. There’s a sense that neither changes dramatically. Skyscrapers spring up in other cities when you leave and come back. Zambia and Wales stay the same. The local chip shop closed nearby. But that’s about it.”

Nyoni spent two years in the master’s programme in screen-acting at Central St Martins. Her first effort, The List, won a Welsh Bafta for best short. Her second short, Mwansa the Great, was nominated for a Bafta and an African Movie Academy Award. I Am Not a Witch premiered at Directors’ Fortnight in Cannes earlier this year. It’s a sort of homecoming for the project: she was previously selected for a Cannes Cinefondation Residency, which backed the feature’s development.

“I put everything into it for four years,” says Nyoni. “I didn’t have a plan B. So to get to Cannes and to see the film with that little trailer featuring all the films and directors that have been there before was both surreal and a total relief.”

I Am Not a Witch opens on October 20th

The Witches (1966)
Joan Fontaine leaves Africa for a nice quiet life as an English schoolteacher only to encounter strange doings. Modern sorcery? Or madness?

Black Sunday (1966)
In Mario Bava’s adaptation of Nikolai Gogol’s Viy, cult heroine Barbara Steele is burned at the stake. But you can’t keep a good witch down.