The Irish man who built America

The Quiet Architect review: an elegant documentary examines Kevin Roche, one of the greatest architects of the modern era 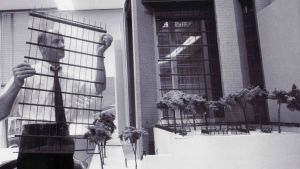 Kevin Roche: The Quiet Architect is filmed by Kate McCullough, one of our finest cinematographers

It would be impossible to contemplate post-war architecture without referencing Kevin Roche. Aged 95, the Dublin-born, Mitchelstown-raised, so-called starchitect has made a huge impact in his field with appositely huge projects.

Having presided over the building of skyscrapers, museums and corporate campuses for more than six decades, Roche finally takes centre-stage in this elegantly constructed documentary portrait from Mark Noonan, a former architecture student who made his feature film debut in 2014 with You’re Ugly, Too.

The Quiet Architect teases out Roche’s various contradictions to fascinating effect. Having landed in the US as long ago as 1949, he retains a discernible brogue. By education, he ought to be a modernist, having assisted Michael Scott on Busáras and Donnybrook Bus Garage, in Dublin, before heading to London to work for Maxwell Fry, and from there, travelling to Chicago to study under boxy minimalist Ludwig Mies van der Rohe.

In 1950, Roche joined the firm of Finnish futurist Eero Saarinen, where he met his wife (of more than 60 years and counting), Jane. He proved a versatile talent, and a diplomatic one, too. When Saarinen died suddenly in 1961, Roche and his colleague John Dinkeloo were confident enough to take over several of their late boss’s grander unfinished projects, notably the Gateway Arch, the TWA Flight Centre at JFK International Airport, and Washington DC’s Dulles International Airport.

As a lead architect, Roche’s own brand of modernism was rather lighter and greener than his block-on-block forebearers. His terraced garden walls around the Oakland Museum in California drew the public toward “the first building in Western architecture that’s a really green building”, as one of the film’s similarly employed talking heads has it.

For decades, Roche has been the go-to guy for multinational headquarters, having built campuses for Santander, Ford and John Deere, among others. (His sole Irish work is Dublin’s hotly-contested Convention Centre.)

Still, as he and many of The Quiet Architect’s participants insist, he’s a problem-solver, not a monument builder, a chap who is not thinking about his builds being seen from space, but instead thinking about space for hat and handbag.

Kate McCullough, one of our fines - and most underrated cinematographers -  savours each Roche build like a sommelier with a rarified Château Margaux. For all his world-building, the unassuming Roche still (partly) chimes with the unpretentious folks he grew up with: “An architect? Sure what he be doing?”