Rey is waving her sword dangerously close to the Kerry rocks. She’ll frighten the cormorants 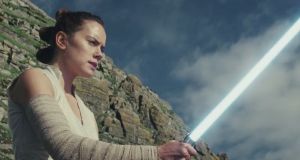 Rey (Daisy Ridley) being irresponsible on Star Wars Island in the first full trailer for ‘Star Wars: The Last Jedi’

We’ve said it before and we’ll say it again (not least because it annoys people). The good people at the Irish Film Board and related quangos can have no complaint about the exposure given to Star Wars Island in the franchise’s promotional material.

The historic outcrop formerly known as Skellig Michael is all over the just released first full trailer for Star Wars: The Last Jedi. As you may recall, Luke Skywalker (Mark Hamill) has been moping about on the island since the age of rotary phones. But a visit from Rey (Daisy Ridley), putative Jedi, looked, at the close of The Force Awakens, set to shake him out of his torpor.

The trailer features a lovely aerial shot of Star Wars Island and a scene in which, while the Atlantic looms benevolently in the background, Rey hands Skywalker a light-sabre with history. That’s all grand. Nothing to panic about here.

But what’s this? Rey is waving her sword dangerously close to the rocks and, at 51 seconds we see an actual rift in the surface. This is almost as appalling as that incident in which some crewmember disordered two pebbles and scared a cormorant. Time to write to The Irish Times.

Never mind all that. Out there in the world, Star Wars fans are, in anticipation of the film’s release before Christmas, simultaneously demanding moratoria on spoilers while ploughing through every detail of the trailer for clues as to plot turns. That’s how fandom works these days.

The theme of the promo (if such things can have themes) is Destiny. I haven’t encountered so much waffle about the subject since I last read Mein Kampf.

“When I found you I saw raw untamed power and, beyond that, something truly special,” a voiceover intones in the first few seconds.

Check out the brand new poster for Star Wars: #TheLastJedi and watch the trailer tonight. pic.twitter.com/A4UGpYqoeW

This seems to be the withered Dark Force boss Snoke, who was played by Andy Serkis in the first film. We then get those scenes of Rey being irresponsible on Star Wars Island.

“Something inside me has always been there,” she says. Luke is also looking forward to some sort of mighty upheaval. “I saw this raw force before and it didn’t scare me then,” he says. “But it does now.”

The foreshadowing of monumental events eases while we enjoy some industry standard – that’s to say dazzling – shots of space fighters shimmying through grooves in larger vessels and a quick glimpse of the late Carrie Fisher looking concerned. Rian Johnson, director of the new film, will, we assume, be dispatching Princess Leia gracefully in The Last Jedi.

Oh hang on. We missed a bit more Destiny. Evil downtown hipster Kylo Ren (benign downtown hipster Adam Driver) has arrived to his spacecraft in a simply awful mood. After smashing up his helmet, he tells us: “Let the past die. Kill it if you have to. That’s the only way to become what you were meant to be.”

He says this right before we cut to the soon-to-be-elsewhere Princess Leia. The clear suggestion is that he’s going to kill his own mum before the credits role. Then again, that could be a massive piece of misdirection. Destiny, destiny, destiny! This stuff really needs to be delivered at a podium before massed storm-troopers.

Here’s Chewbacca in his ship beside a cute little beast – part seabird, part prairie dog – that researches inform me is called a Porg. We applaud the Porg because the puffins on Star Wars Island inspired its creation and because cuddly characters such as the excellent Ewoks have always annoyed Star Wars purists. More Porgs please.

Anyway, in case you thought you’d escaped the unstoppable advance of Destiny, Poe Dameron (Oscar Isaac), has arrived to make his contribution. “We are the spark that will light the fire that will burn the First Order down,” he says.

There are a lot more explosions and some tantalising glimpses of sexy hardware before a still forward-looking Snoke returns to this theme that, in just two and a half minutes, has been worn down to the bone and into the marrow. “Fulfil… Your… Destiny,” he says.

He actually says the word. But we’re not done yet. Sending heads spinning throughout the globe, the nice Rey purposefully addresses the evil Ren. “I need someone to show me my place in all this,” she says. Does her Destiny lie on the dark side? Surely this is another deflection.

At any rate, one thing is made very clear throughout an admittedly nifty promo. These people are born to do things. Fate is driving them towards catharsis. Destiny, destiny, destiny. Have you got that?

You can learn where they’re all heading when The Last Jedi opens on December 14th.

The Amritsar massacre: a cold, callous display of colonial evil
6

Pachinko review: a masterpiece of empathy, integrity and family loyalty
7

‘Black hair is so much more than hair’: Emma Dabiri’s passionate exploration of identity
Real news has value SUBSCRIBE