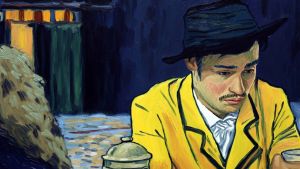 To paraphrase Dr Johnson on that dog walking on his hind legs, I’m not sure this is worth doing, but it is remarkable that it is done at all. Dorota Kobiela and Hugh Welchman’s technically dazzling film draws on the works of Vincent Van Gough to create “the world’s first fully painted film”. Each of the 65,000 frames counts as an individual tribute to the great man. Strung together, they constitute one of the more deranged follies in recent cinema. It’s wonderful. It’s also corny, weird and a little cheesy. It would not be out of place as a commission to accompany the recently acquired trophy art in a Las Vegas casino.

The picture begins very much in Wikipedia mode, with characters talking through the life and recent death of Van Gogh. “It was all fine until that fellow Gauguin turns up,” somebody says. In one lengthy description of Van Gogh’s odyssey Père Tanguy (John Sessions), subject of a famous portrait, actually drops into TV-historian present tense.

The main body of the film is odder still. Armand Roulin (Douglas Booth), wearing the yellow jacket immortalised in another Van Gogh painting, is unhappy about the circumstances of the artist’s apparent suicide. Large bodies of the film – one in particular, where he wonders when the victim got hold of the gun – thus suggest the unlikeliest imaginable episode of Columbo.

The technical brilliance, the strong voice work and the sheer chutzpah will keep most sensitive viewers interested. Chris O’Dowd, Saoirse Ronan and other sound people have their faces integrated with Van Gogh subjects in a manner that recalls the rotoscoping in Richard Linklater films such as A Scanner Darkly. Clint Mansell’s score swells beautifully beneath the swirling paint. But it’s hard to escape the notion that Van Gogh’s paintings are already so vigorous and uncontained that they require no animation. It’s like putting words to the Goldberg Variations or making Leonardo’s David dance.

Have you a moral duty to care for others?
9