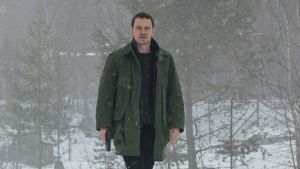 There’s nothing much wrong with Tomas Alfredson’s classy adaptation of an admired detective novel from the Norwegian author Jo Nesbø. Michael Fassbender has enough weary charisma to play Harry Hole, the archetypal troubled cop, without breaking into so much as a trot. Rebecca Ferguson confirms her rising status with a winning, intelligent performance as a balancing sidekick. And, as Alfredson has shown in Let the Right One In and Tinker Tailor Soldier Spy, nobody is better at infiltrating damp, mouldy gravity into genre exercises. You can feel the pathetically fallacious snow shrinking your bones within minutes of the credits rolling.

We can forgive Nesbø for creating yet another boozed-up flawed genius who immediately intuits more than the rest of the department could deduce if bathed in evidence for a decade. The character is as much a reliable staple of detective fiction – hello, Insp Rebus – as Pierrot is of commedia dell’arte, and Fassbender gives us a knotty, robust variation on theme.

The plot will certainly do well enough. We begin with a prologue in which, somewhere out in the tundra, a young boy endures abuse from his mother’s ghastly boyfriend. Decades later, women are being murdered in Oslo at the first snowfall of winter. Do the snowmen that appear near the victims’ homes offer any clues? You bet your Scandi noir they do.

Once Harry Hole has crawled off his bench, and shaken the ice out of his ears, he is seeking answers in the lower depths and corridors of power.

Here’s the problem. Over the past few decades something has shifted in screen culture. The procedural detective thriller barely exists in cinemas any longer. Whereas Nordic thrillers have taken over telly, even The Girl with the Dragon Tattoo struggled to make money in the megaplex. Alfredson has made a very decent thriller, full of rich performances and hairpin turns, but it feels strangely out of position. Such things shouldn’t matter. But they do.