The Ritual: The folk horror revival continues, so stay out of the woods

Four former college friends set out on an isolated hiking trail – what could go wrong? 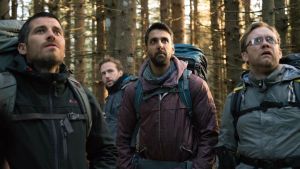 One of the most welcome developments in contemporary genre cinema has been the creeping revival of the folk horror, with Ben Wheatley’s Kill List and A Field in England, David Keating’s Wake Wood, and Tom Shankland’s The Children tapping into the old ley lines.

The Ritual, a taut new film from director David Bruckner (The Signal, V/H/S), is recognisably related to such weird, wondrous classics of the form as The Wicker Man and The Blair Witch Project. But its themes of grief and guilt equally gesture toward J-horror, a subgenre wherein festering thoughts are routinely made manifest.

This psychological dimension, imported from Adam Nevill’s award-winning 2011 source novel, elevates the material above its rather familiar “if you go down to the woods today; no, really, just don’t” pitch.

Thus, four former college friends, played by Rafe Spall, Arsher Ali, Robert James-Collier, and Sam Troughton, set out on an isolated northern Swedish hiking trail. There used to be a fifth chum, but he is murdered in a prologue as an off-licence hold-up goes horribly wrong. Luke (Spall) looks on, frozen in fear. Luke, the most laddish and least mature of the posse, blames himself for his pal’s death, and when the hike starts to go awry, it’s clear he’s not the only one.

When Dom (Troughton), the most domesticated and moany friend, twists his knee, the infighting soon kicks off. So sensible unofficial group coordinator Hutch (James-Collier) proposes a shortcut through the forest. What could possibly go wrong? They’ll be back at the lodge by nightfall, right?

Hours later, they are nowhere near the lodge, and the crew take refuge in a strange abandoned shack, a dwelling adorned by strange markings. Outside, some class of beast, man or thing makes unholy noises. Inside, they are plagued by nightmares. And their holiday is about to get a good deal more hellish.

The plain-spoken banter and bickering among the impressive central quartet make them the ideal foils for spooky goings-on. DOP Andrew Shulkind makes the trees look increasingly oppressive and crowded. Ben Lovett’s music is pagan and discombobulating. Even the CGI does not disappoint. Bruckner’s genre timing is spot on even if the finished film could be a tad more terrifying. Winningly witchy, nonetheless.