James Gray: 'I went back to the US and got told I was nothing'

The director’s on working with Brad Pitt on Ad Astra, being ignored in America and making movies in Northern Ireland 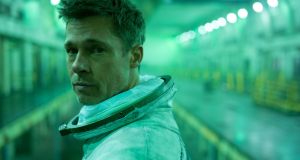 The film industry is seldom a cake-walk, but even by the various standards of the “biz”, James Gray’s career has been a fraught one. His second film, The Yards, and his fifth feature, The Immigrant, were both snapped up, then buried, by Harvey Weinstein. The disgraced movie mogul acquired The Immigrant without Gray’s knowledge, demanded cuts, and then attempted to release the film straight to VOD when the filmmaker refused.

The Queens-born auteur has traditionally fared better in Europe. His 1994 debut, Little Odessa, won the Silver Lion at Venice. Four of his subsequent features have competed for the Palme d’Or at Cannes. We Own the Night (2007) and Two Lovers (2008) were both nominated for Best Foreign Film at France’s Cesars.

“It’s very nice,” says Gray. “You get the ego-boost and then I get home and my wife says: ‘take out the garbage’. In some ways it’s gratifying because it allows me to recognise that the work is communicating with somebody at least. You don’t really try to make – if I may use the dirty word ‘art’ – in a vacuum. You want to try and communicate. So you get an award and the thrill lasts for about 12 minutes. There’s a famous quote by Ernst Lubitsch, the great director; he said even the most dignified person in the world is ridiculous at least twice a day. So no matter how much praise you get from some French or Spanish writer, you quickly realise that you’re a moron again.”

It’s tempting to see parallels between Gray’s European reputation with Cahiers du Cinema and the very Gallic championing of directors like Nicholas Ray and Howard Hawks. The dial, however, is shifting. In 2013, The Immigrant, Gray’s epic, diseased romance featuring Marion Cotillard and Joaquin Phoenix was set upon by several British critics and lauded by their American counterparts. “It’s as if the ghosts of an older, vanished New York have been freed from the tyranny of faded photographs and allowed, once again, to move, think and feel,” wrote Stephanie Zacharek in the Village Voice.

Reactions from the film’s Cannes premiere blew up into a much-publicised disagreement between Gray and the Guardian’s senior film critic, Peter Bradshaw. “The Guardian’s review was one of the dumbest reviews I’ve ever read,” Gray told the Marrakech International Film Festival some months after the film’s bow; “He spoke at length about how the film went south once I staged a preposterous scene where Caruso sings for the immigrants, which is actually the recreation of an actual event.”

“Things have changed,” says Gray. “I used to get my juice in Europe and then I went back to the US and got told I was nothing. I think sometimes you need a level of cultural difference to judge. If you look through history, even someone as great as Miles Davis had to be discovered by the French first. I’m not comparing myself to my Miles Davis! But cultural distance was important for a lot of artists and filmmakers like Fellini and Kurosawa. Again. I’m not comparing myself to them. And that reputation away from home is not so much the case anymore. Americans have been very nice with my last two films.”

Gray’s seventh film as director concerns Major Roy McBride (Brad Pitt), an emotionally aloof astronaut who journeys to the far reaches of the solar system upon discovering that the father (Tommy Lee Jones) he thought had been dead for decades may be alive. More troublingly, his father might be responsible for deliberately targeting Earth with a series of planet-threatening radioactive bursts from his research station at Neptune.

Cerebral science fiction has produced recent hits for Alfonso Cuarón (Gravity), Christopher Nolan (Interstellar) and Ridley Scott (The Martian), but it remains a tricky genre, one where even a recognisable brand like Blade Runner 2049 can lose $80 million at the box office.

“I’s a horrible genre,” smiles Gray. “You know why it’s so hard, I think? If I make a film about us, here, in this room, I don’t have to lay the groundwork about what kind of environment we are in. There are things you can pick up from the production design or costume. But with science fiction, the movies can’t do the work for you. You need to go the extra mile.

“You have to set the context for every single scene. And what that means is that it has to be as narratively simple as possible because of all the leg work you’ve got to do outside of the narrative. My basic idea was to do the Odyssey from Telemachus’s point of view.”

There are additional nods to Herman Melville’s Moby Dick and Gray does a note-perfect impersonation of Tommy Lee Jones’s Ahab channelling speech in the late stages of the picture.

“I have to confess to you I was supposed to read Moby Dick in high school and I cheated my way through and read the Cliff Notes instead,” says Gray. “But when I was in my early 30s, I went to a movie with my wife, and it was a terrible movie and I was in a bad mood because we had paid for the tickets and the babysitter. And on the drive home I said to my wife, ‘you know, I spent time on that and I’ve never even read Moby Dick’. And she said: ‘well, why don’t you read Moby Dick; there is a bookstore right there and it’s open’.

“So I pulled over and I bought the book and I read it in four days and I was blown away. I couldn’t believe how funny the first part was. But the only thing I was stunned by was the narcissism. Here’s this man dreaming of killing this white whale and the pointlessness of his ambition and how Starbuck recognises that.

“It’s connected to an idea of masculinity that I think is really screwed up. Brad and I talked at length about taking down that toxic masculine ideal. The character’s pulse rate never goes above 80 and that’s held up as a great thing. It probably is in those moments when you are doing a space walk but as a person, it indicates a sense of emotional cowardice. We thought that was a powerful idea.”

This is the kind of intellectual heft James Gray’s superfans – I’m somewhere in the front row – have come to expect. At first glance Gray, who read every Shakespeare play (if not Moby Dick) while he was still in his teens, is rooted in genre. Little Odessa is a mobster movie; Two Lovers retains the shape of a romantic comedy; The Lost World of Z is an Amazonian adventure. Yet each of these projects has a mythical dimension. Even Gary’s New York gangsters feel like they walked out of the Old Testament.

Ad Astra marks the director’s second collaboration with Brad Pitt, who is the film’s producer and star. Pitt previously produced The Lost City of Z, and would have headlined that film if scheduling conflicts hadn’t got in the way. Ad Astra, as the reviews from the film’s Venice premiere have indicated, marks a clear career best for the actor. Gray consulted three-time Pitt collaborator David Fincher for advice on how to best direct the actor. He hasn’t revealed what Fincher said, but whatever it was, it worked. Pitt has never been so textured on screen.

“He was great about it,” says Gray. “And he doesn’t do this kind of role very often. If you look at his filmography you’ll be surprised how infrequently he’s the star of a movie. More often, he’s the producer or he’ll be part of an ensemble like he is in Once Upon a Time in Hollywood. He was very game on this. I think he’s at a time of his life when he needs to express vulnerability and I think we are coming from the same place on that.”

Having journeyed back from the far reaches of the Milky Way, Gray would love to, some day, return to Northern Ireland where he shot much of The Lost City of Z with Charlie Hunnam and Robert Pattinson, an actor he describes as “quite a character”.

“It was the greatest thing ever,” says Gray. “The second half of that shoot was brutal because it was in the Amazon and it was physically very difficult. There was one scene we did in Northern Ireland, which was set in the trenches of World War I, and that was nightmarish on a production level because of the mud. But the rest of the Northern Ireland shoot was the happiest I’ve ever been making a film. Pure happiness. All you have to do is turn the camera on and the sky does all the work for you.”

Slavoj Žižek: ‘Joe Biden is long-term the same catastrophe as Trump’
5 Welcome to the child sex capital of Europe
6