Extra Ordinary: The film's most valuable asset is Maeve Higgins

Review: This intimate romp about everyday people packs in a lot. Maybe too much

Irish supernatural comedy Extra Ordinary stars Maeve Higgins as a driving instructor who shoulders an ability to communicate with the dead. Video: Wildcard 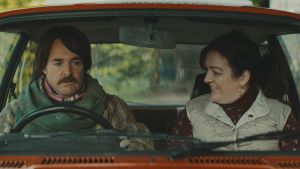 You couldn’t accuse Mike Ahern and Enda Loughman, writer-directors of this amusing Irish comedy, of selling us short on knockabout content. Extra Ordinary packs a staggering amount of material into its busy 94 minutes. It’s an intimate romp about everyday people but, unusually for a film set in rural Ireland, it also opens portals to eternal damnation. You don’t see that every day.

The picture’s most valuable asset is Maeve Higgins. The comic hits just the right tone as Rose, a driving instructor who shoulders an ability to communicate with the dead. Her late father (Risteard Cooper), a psychic huckster, once encouraged her gifts, but she now shuns any pleas to make contact with the spirit world. As she drives along, she waves genially to the ghosts who exist alongside the quick.

Higgins, who offered some help with Ahern and Loughman’s script, gives us a woman who feels no shame in her own eccentricity. There is a sense that Rose may live a lonely life, but the actor never admits mawkishness or pathos.

Anyway, a possibility of companionship announces itself when she takes on Martin (Barry Ward) as a student. He seems nice enough, but he has an ulterior motive. He and his daughter are plagued by a deceased, though still naggy, wife and mother. As the carpenter will in the western movie, Rose eventually agrees to take her (metaphorical) gun from over the fireplace and re-engage with the struggle.

Elsewhere in the town, an international pop star named Christian Winter (Will Forte) is contemplating a pact with the devil to recapture chart success. You get a sense from that summary (and there’s more) of how overstuffed Extra Ordinary feels.

Happily, it makes a virtue of its bagginess by digging deeper into excess. Pulling a few threads from Chris De Burgh here and a few from Meat Loaf there, Forte gamely weaves a character – existing among red drapes and gothic towers – who would feel right at home in the novels of Denis Wheatley.

The ante is constantly upped towards a climax that demands epic suspension of disbelief. Extra Ordinary is not always subtle, but most viewers will yield to its mystic charms.