Jennifer Lopez and Constance Wu star in Hustlers, the real-life story of a crew of savvy former strip club employees who turn the tables on their Wall Street clients. Video: STX Entertainment 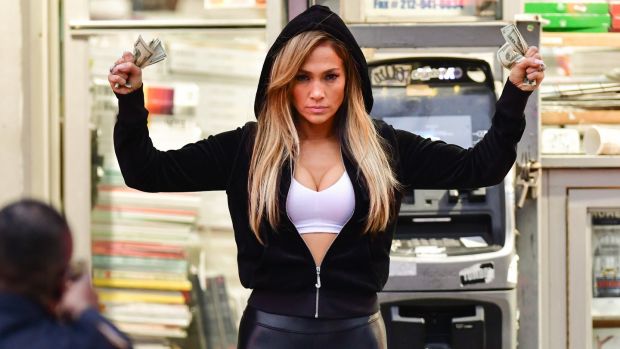 So here come words we weren’t necessarily expecting to write : give Jennifer Lopez the freaking Academy Award for Best Supporting Actress right now. Yes. We know, Nicole Kidman (The Goldfinch), Meryl Streep (The Laundromat) Laura Dern (The Marriage), Annette Bening (The Report), and Maggie Smith (Downton Abbey) are all in contention. And we’ve seen some of these amazing performances. Yet to all of these fine artists: we’re breaking out the relevant “I don’t know her” GIF.

The trailer for the tremendously entertaining Hustlers makes it look like a hen party extravaganza but the film, which was produced by Will Ferrell and Adam McKay, has more wit and emotional heft than that superficial iteration suggests.

Smashing the Bechdel test with a genuinely touching and rambunctious depiction of female friendships, it’s is as smart as it is riotously enjoyable.

The gloriously tacky yet seductive pitch is ripped from the headlines or, more accurately a 2015 New York magazine article: strippers skim their Wall Street clientele using a heady mix of feminine wiles and MDMA. Hey, as J-Lo’s Ramona reasons, “Look what these guys have done to this country”.

Screenwriter Lorene Scafaria is aware of the ethical squiffiness. Enter dependable Julia Stiles as a fictionalised version of Jessica Pressler, the award-winning journalist who broke the story that inspired the film. She’s on hand to raise an occasional eyebrow and ask difficult questions of the film’s heroine, Destiny (Constance Wu).

As with the main cast, Hustlers knows how to work a room, with lots of slow-mo glamour and impeccable musical cues.

Beneath the seductive surfaces, it’s a sturdy crime caper with an unexpectedly big heart. Destiny’s adventures in stripping begin on Wall Street in 2007 in the flurry of dollar bills she hopes will get her grandma out of debt. It’s a ghastly business, what with the flash money men shouting “Hey, Lucy Liu” or asking “What did daddy do to you?” but she soon finds a sisterly mentor in the curvy shape of Ramona (Lopez). “Climb in my fur,” offers the older, sager pole-dancer, as she swooshes back a corner of her pelt.

Following the financial crash, Ramona enlists Destiny and other women into a new, not remotely legal racket. Hey, she reasons again, “This entire country is a strip club: you’re either dancing or throwing the bills.” Soon enough, they have built a thriving business. But as the framing device suggests, it can’t last.

The supporting cast, even starrier inclusions Lizzo and Cardi B, fail to make much of an impression. It’s not entirely their fault. Hustlers is a two-woman show. Wu, who couldn’t be a hotter property after Crazy Rich Asians, works every acting muscle. Lopez, who is alternately maternal, sisterly, steely and warm, reminds you that she has more old-school star wattage than Once Upon a Time in Hollywood’s Brad and Leo can muster as a team.

Awards season is officially upon us.