Review: This extraordinary film is certain to resonate with Irish fishing communities 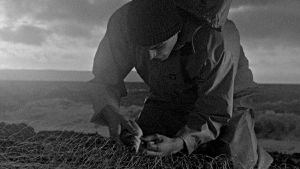 Every frame in Bait makes for a sensational tableau.

And just like that: Bait comes along to remind you that, against the monopolisation corporatisation and homogeneity of the contemporary film industry, cinema can still be magic and light.

Mark Jenkin, a young British director, achieved a degree of prominence among film anoraks with his 2015 short Bronco’s House, an expose of Cornwall’s housing crisis, shot on a clockwork Bolex cine-camera on monochrome 16mm film and developed in a coffee solution.

The promising auteur brings the same evocative and ghostly methodology to his extraordinary debut as a writer-director. The gorgeous retro-effects, bolstered by disjointed post-production sound and eerie glitches, recreate the new wave thrills; Bait could easily play alongside Jean Luc Godard’s Vivre Sa Vie or Hiroshi Teshigahara’s Woman in the Dunes.

There is heft behind the phantasmagoria and a story that is certain to resonate with many Irish fishing communities. Martin (YouTube star “Kernow King” Edward Rowe, glowering magnificently) and Steven Ward (Giles King) are bickering brothers in a Cornish fishing village. Martin continues to eke out a living by selling fish and lobster door-to-door; his brother, much to Martin’s gruff displeasure, uses their late father’s boat to ferry tourists along the coast.

It doesn’t help that the family home has been sold on to well-heeled interlopers Tim and Sandra Leigh (Simon Shepherd and Mary Woodvine) as a weekend get-away. A romance between the couple’s daughter (Georgia Ellery) and Martin’s apprentice (Isaac Woodvine) adds to an increasingly sour atmosphere.

There are ongoing battles, concerning everything from parking spots to lobster pots. between the tourists and the traditionalists, disputes that gradually escalate from clipped exchanges to violence.

Every frame makes for a sensational tableau, and Jenkin’s remarkable match-cuts between such superficially banal things as food preparation are used to summon jangling nerves and a sense of unease. Even the edits are a kind of conjuring in Bait.

Hunt for the Wilderpeople review: super all-ages adventure with a hint of danger
6