Review: The film follows events in a Dublin sex shop during a fraught working day

The official release of the Irish comedy film, "Thank You Come Again". 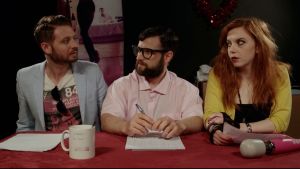 Far from an unqualified success, this Irish sex comedy reveals its limited budget in every frame

The release of this no-budget Irish comedy is coloured by the sad death of Steve Harris, a key cast member, in an accident four years ago. The impressively stubborn production team stuck to their task and present Thank You Come Again as a tribute to their late friend.

It takes nothing from the ingenuity and determination on display to regretfully note that the picture is far from an unqualified success. A sex comedy in the creaky style of Robin Askwith — though nastier and less chummy — Thank You Come Again (is it really called that?) reveals its limited budget in every frame.

The characters arrange themselves in rigid rows and, to an almost constantly static camera, bark out lines that would, in too many cases, have better remained unsaid. (A piscine variation on the C-word feels no less misogynistic for its emergence from a misogynistic character.)

Other actors yell from the back of the set to make themselves heard. Plot elements leap forward and then cower away as crude set pieces dominate the rigid proscenium.

One model for the production looks to be Kevin Smith’s Clerks, but Stephen Clarke Dunne’s film can’t manage that project’s singularity of purpose. It’s more disordered than a free period supervised by a newly arrived student teacher.

Thank You Come Again (that’s still the title, I’m afraid) concerns events in a Dublin sex shop during a more than usually fraught working day. Falling back on a weirdly common device in lower budgeted Irish film, the picture allows newsreaders on conveniently placed TVs to do much of the exposition.

It seems that blood diamonds are a current concern and, when one of the staff encounters a handful of jewels, we expect the same shenanigans that domestic films so often bring to encounters with suitcases full of money. That happens.

But not before we get more borderline-random bopping from sexy priests to disappointed jobseekers to wearisome speed dating.

There is, during the current era of swish Irish cinema, something comforting in seeing so ramshackle an old-school production hit commercial cinemas. The closing tribute to Steve Harris is moving. Decent actors do their best.

But Thank You Come Again (yup, it’s still there) is of value largely as a brave oddity.

Poem of the week: Phenomenon
Real news has value SUBSCRIBE