For Sama: Probably the most powerful film yet about Syria’s civil war

Review: Waad al-Kateab’s documentary has moments of beauty among the horrors 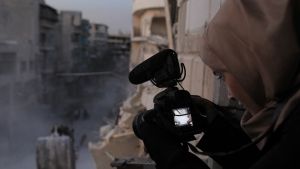 For Sama: speaks to the human capacity for survival

Over the past few years, there has been a rush of excellent documentaries about the continuing civil war in Syria. It’s almost as if someone thinks the world isn’t listening. A crisis has escalated to the point of catastrophe and the West, jaded after the Iraq quagmire, has chosen to look firmly in any other direction.

The latest cinematic plea for attention may be the most powerful yet. Waad al-Kateab began For Sama as a sort of video diary – a record in case she didn’t make it out alive – it was picked up as citizen journalism and then transformed into a film that allows moments of beauty among its parade of horrors. Nothing cuts through the propaganda more incisively than human stories.

The film, co-directed by Ed Watts, an Emmy-winning film-maker for Channel 4 and ITN, slips backwards and forwards through time, but we begin at the beginning and end at the end.

Back in 2012 Waad joined other friends in supporting peaceful protests against the oppressive regime of Bashar al-Assad. Five years later she was forced to leave an unrecognisably devastated Aleppo. Along the way she married a courageous doctor named Hamza and gave birth to the girl whose name appears in the title.

“At that time, the only thing we cared about was the revolution,” she says in the sunny opening scenes. By the close her voice is clenched and wary.

The film-makers have said they were forced to cut some of the more horrific footage, but what remains is appalling enough. Anybody who turns over when the news warns of “scenes you mind find upsetting” would be as well to keep their loins girded throughout. It would, however, be a shame to miss such a searing document.

For Sama, a hit at Cannes and at the South by Southwest festival, has already drawn praise for a stunning, near-unwatchable birth sequence at its centre. The doctors perform a C-section as bombs make rubble of surrounding streets. The baby, who seems dead, is hung upside down, his chest is massaged and, after agonising seconds, he breathes noisily into life.

There is much material here for students of ethics in documentary film-making. We know the child will survive because surely they wouldn’t dare show us the sequence if he hadn’t. That would be too cruel and too intrusive. And yet the dead and dying are all over For Sama. When is it right to fit them into someone else’s narrative?

Relief comes from the warmth of the core story and from the odd moment of visual transcendence. We sense Waad learning her skills as she goes along. Early sequences are jerky and simply framed. Towards the close, she makes use of a drone to convey the panoramas of oblivion that have taken over this historic city.

There is an implicit rebuke to the outside world here and more explicit pleas in Waad’s comments on the Russian planes that arrive to destroy her neighbourhood. She manages to get across the fact that all rules of war – insofar as such things exist – have been abandoned here. Hospitals are not merely caught in the crosswire; they are specific targets. Eventually chlorine gas is used on the citizens.

Yet she and her family manage to live something like an everyday life. Watching how they cling to the juddering apartment with its patch of garden space – the first home they shared together – we gain a better understanding of why citizens choose to remain in besieged cities. It might be overstretching it to say the film ends with a message of hope. But it does, at least, speak to the human capacity for survival.

Terry Jones, Monty Python star, dies at the age of 77
3