Veteran character actor Richard Jenkins (70), who shared the screen with Newman and Pacino, is finally ready for the limelight

Official trailer for The Shape of Water. 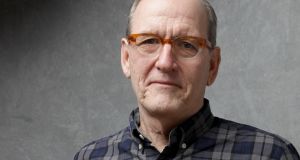 It’s the morning after the London premiere of Guillermo Del Toro’s The Shape of Water, and Richard Jenkins – one of that film’s stars – is still marvelling at the quality of the project. “Oh boy,” he says, with a little shake of the head. “It’s just this beautiful story, shot in an incredible way, and made by a genius.” He smiles: “That’s all.”

Del Toro’s cold war interspecies romance was nominated for 13 Oscars, including a nod for Jenkins as Best Supporting Actor. It’s the 70-year-old’s second shot at Hollywood’s premiere competition; he was shortlisted for the Academy Award for Best Actor in 2008 for The Visitor (ultimately losing out to Sean Penn in Milk).

That kind of visibility has been a long time coming for the Illinois-born character actor. For decades, he was a best-kept Hollywood secret, despite having shared screen time with Paul Newman, Al Pacino, and Lily Tomlin.

He was about to turn 40 when, in 1987, he was cast in his first sizable role alongside Susan Sarandon, Cher, Michelle Pfeiffer and Jack Nicholson in The Witches of Eastwick.

“I drove to the set on the first day and they wouldn’t let me in,” he recalls. “I said ‘But you don’t understand, I’m in the movie,’ and the guy on the gate said ‘Yeah sure, me too, buddy.’”

A recurring role as the late patriarch on HBO’s Six Feet Under introduced Jenkins to a wider audience. By then, he had been directed by Woody Allen (Hannah and Her Sisters), Kathryn Bigelow (Blue Steel), Sydney Pollack (Random Hearts), Clint Eastwood (Absolute Power), and Chantal Akerman (A Couch in New York). A dab hand at comedy, as Step Brothers fans can attest, he’s a longstanding favourite of the Farrelly Brothers, having appeared in There’s Something About Mary, Me, Myself & Irene, and the Three Stooges, and of the Coen Brothers, who have cast Jenkins in The Man Who Wasn’t There, Intolerable Cruelty, and Burn After Reading.

“There’s never been one big break,” he says. “It’s been a series of breaks. Take away one of them and maybe everything else would disappear.”

By the time the breaks came, he had learned to be philosophical about his calling.

“Early on, on one of the first movies I worked on, I was really excited and saying, ‘God, I hope the movie’s good’,” says Jenkins. “And I was working with Geraldine Chaplin. And she said, ‘You can’t control that. That has nothing to do with you. Did you have a good time making it?’ I said I did, and she said, ‘Well then, it’s a good movie for you.’ It’s good advice. Even if it’s sometimes hard to heed. That little bit between hearing the words ‘action’ and ‘cut’ is the only part you have any control over.”

These days, there’s a recognisable Richard Jenkins type. S Craig Zahler wrote the cannibal western Bone Tomahawk with the actor in mind. Frances McDormand, similarly, earmarked Jenkins early on for the HBO mini-series, Olive Kitteridge (for which he won a Primetime Emmy for Outstanding Lead Actor). He’s still in shock. Back in 2008, when director Tom McCarthy (The Station Agent, Spotlight) called to say he had written the screenplay of The Visitor for Jenkins, the actor assumed he had dialled the wrong number.

“As much as I loved and understood the character, I didn’t think anybody was going to finance a movie with me as the star,” says Jenkins. “I’m a working man with two grown-up children. And suddenly people were interviewing me. I kept checking over my shoulder to see if they were talking to someone behind me.”

Jenkins became a film buff while growing up in DeKalb, an Illinois farm town. “We would go to the cinema every weekend no matter what was on.” An only child who, between movies, would amuse himself by studying ant colonies, he declared an interest in acting while still at junior high school. His father, a dentist, was not enamoured with the idea.

“I did a play and I was talking about it at home,” says Jenkins. “What I didn’t know was that my father didn’t want me to act.  It was only years later, when somebody interviewed my teacher, who was still in DeKalb, that I found out that after I did this play, my father called her and said he was worried because I was talking about wanting to be an actor. And she said if you stop him, he will never forgive you and you’ll have to live with that.

“She must have sensed this would be the only thing I’d ever be good at. So my father was never anything less than 100 percent supportive. And I had no idea that that conversation ever took place.”

Jenkins is old enough to recall 1962, the year in which  The Shape of Water is set, as a great time. ‘I was in high school in 1962. It was a wonderful time for me. Because I was a white, straight male’

After graduating from Illinois Wesleyan University, Jenkins was hired as an apprentice at a theatre in Providence, where he remained as a resident player until the 1990s. Barring a brief, nine-month stint in Los Angeles, which the actor describes as a “terrible time”, he has lived in Providence for more than 40 years, and has been married to choreographer Sharon R Friedrick for almost 50 years. He is, by his own account, a creature of habit. He might still be treading the boards in Rhode Island, had fate not intervened.

“I was doing a play at The Long Wharf Theatre, and my theatrical manager Bill Tresh was in the audience with Sandy Dennis from Who’s Afraid of Virginia Woolf,” recalls Jenkins. “And Sandy Dennis said to him ‘Sign him’. And he came backstage and said ‘I want to sign you’. I was like 36. I said ‘Really? Me? What for?’”

Jenkins is old enough to recall 1962, the year in which The Shape of Water is set, as a great time. “I was in high school in 1962,” he says. “It was a wonderful time for me. Because I was a white, straight male. If you were anybody else – if you were a woman or a person of colour or you had a disability – it wasn’t so wonderful.”

“I don’t remember any gay men back then,” says Jenkins. “It was only returning to my high school reunions over the years that I’ve realised: oh, they’re gay. But I think we had to get to our 40th reunion before there were gay people at my school. It wasn’t something that people talked about or even considered. In 1962 those people and so many others were invisible. The irony is when you hear the phrase ‘Make America Great Again’, that’s the time they are talking about. What they really mean is make America great for white, straight men.”

While the actor remains mindful of Geraldine Chaplin’s advice, he did feel that The Shape of Water was, from the get-go, a little bit special.

“It felt like a classic 1940’s film,” he says. “Guillermo is a little bit like a modern Frank Capra. And everything on the set was authentic. It was a complete, detailed movie world. You almost expected Spencer Tracy to turn up.”

SEAMONSTERS AHOY! – IT CAME FROM THE DEEP

The Beast from 20,000 Fathoms (D. Eugène Lourié, 1953)
A fictional dinosaur, the Rhedosaurus, in awakened from its frozen, hibernating state by an atomic bomb test in the Arctic Circle. Loosely based (very loosely) on Ray Bradbury’s short story The Fog Horn.

Godzilla (D. Ishiro Honda, 1954)
The monster movie as political statement: Honda was an ex-soldier who survived the firebombing of Tokyo and who witnessed the aftermath of the Hiroshima bombing. His kaiju classic ends with a grim contemporaneous warning: if nuclear testing continues, another Godzilla will probably appear somewhere in the world again.

The Host (D. Bong Joon-ho, 2006)
Is that a lizard? Or an amphibian? Nope, it’s an ecological disaster. A reformed deadbeat dad attempts to retrieve his daughter from a monster that has grown from formaldehyde dumped into the Han River by – guess who? – the US military.

Spaced-out Barcelona gets its groove on
4

John Boyne: ‘I am not a provocateur. I don’t seek to hurt people’
5