Tad the Lost Explorer and the Secret of King Midas: Indy’s Spanish adventure

Review: This animation owes a large debt to Indiana Jones but cuts too many corners 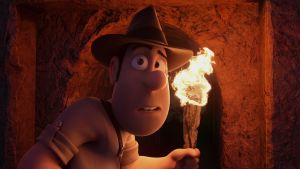 Tad is an accidental Indiana Jones, who, as the sequel opens, is studying archaeology during breaks at his construction job.

Film Title: Tad the Lost Explorer and the Secret of King Midas

Capture the Flag director Enrique Gato is the Spanish John Lasseter , but without the ‘excessive hugging’ and unpleasantness. The Goya-winning 3D/2D animation designer has been creating videogames since the 90s but remains best known for the multi-platform character at the centre of this new film.

The Secret of King Midas is a sequel to the 2012 Spanish 3D computer-animated adventure-comedy, Tad, the Lost Explorer. The same films are known as Tadeo Jones 1 and 2 on the Iberian peninsula, where they have done brisk box office. Tad 2 alone has taken around $25 million in its home territory.  The clue is in the title and the incessant references: “My Indy hat”, cries Tad, as his headpiece almost gets left behind in an underground labyrinth.

Tad is an accidental Indiana Jones, who, as the sequel opens, is studying archaeology during breaks at his construction job. He’s eager to get back to the field and back with his love interest, the daredevil, superstar archaeologist, Sara.

A bumbling excavator is not the worst idea, even if the new film fails to go the full Clouseau. Several high-octane chase scenes introduce Sara’s mad skills, a plot concerning King Midas’ amulet, and the bad guy, Jack Rackham.

There are various crummy dubbed animations that have somehow managed to rope decent actors into lending their pipes to creaky visuals. (If you think that Patrick Stewart’s performance as poop in last year’s Emoji Movie was a lowlight for the Knight of the Realm, then you didn’t hear his pointlessly Scottish voice-work in the abysmal South Korean film, Spark.) It’s a shame that Tad 2 didn’t shell out for A-listers; where the original film featured Cheech Marin and Modern Family’s Ariel Winter, the sequel is happier to make do with lesser-known character actors. That’s a big mistake when the English-language dialogue is as Google Translated as it is here.

Against that, the comic sidekicks, including an enthusiastic dog, an eye-rolling parrot, and a goofy Incan mummy, are lively. The visuals, though not as sophisticated as those found in Hollywood product, are speedy. The plot is straightforward. But wouldn’t you rather be re-watching Coco?