The 15.17 to Paris: Thank-you not very much Mr Eastwood 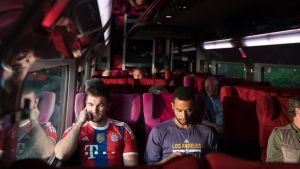 On August 21st, 2015, Moroccan national Ayoub El Khazzani boarded a high-speed train headed for Paris, armed with an AK-47, a pistol, a box-cutter and enough ammunition to mow down every passenger on board. His attack, apparently inspired by Isis, was thwarted by the swift actions of several passengers, including 51-year-old French man Mark Moogalian; Chris Norman, a 62-year-old British businessman, and three young American tourists: Alek Skarlatos, Anthony Sadler and Spencer Stone.

Clint Eastwood’s characteristically unfussy historic re-enactment casts these young men as themselves, a move that doesn’t quite produce the hard-hitting neorealist clout of early Robert Bresson or Roberto Rossellini, but which does, nonetheless, lend the proceedings an easy naturalism. At first glance, The 15:17 to Paris appears to fit with the director’s recent run of films, notably Sully and American Sniper, in which ordinary men do extraordinary (and in the case of Chris Kyle, gruesome) things .

The three lads have a long and average history. They attend middle school together in Sacramento, get into scrapes, play around with airsoft weapons, and stay in touch into young adulthood. Against this, Dorothy Byskal’s script and primary protagonist Spencer Stone insist that the events on that train were a long time coming. As youngsters a teacher asks: “If something were to happen right now, would you know how to act?” Years before Skarlatos and Stone enlist for military service, they favour camouflage clothes. Army medical training and Brazilian ju-jitsu classes both include manoeuvres that will prove life-savers in 2015.

As Skarlatos sets off for a tour of duty in Afghanistan, his mother prophetically warns: “I prayed about you and God spoke to me and told me that something very exciting is going to happen to you.”

Well, God got that wrong. While the actual re-enactment of the tussle with El Khazzani is thrilling and surprisingly moving, the movie leading up to it, particularly the young Americans backpack tour of Europe, is like watching somebody else’s holiday snaps. Roman Colosseum. Check. Canals of Amsterdam. Check. Steins of Germany. Check.

Are we there yet?

There’s a great deal of God-bothering throughout. (An early ADD diagnosis for Skarlatos and Stone is met with “My God is bigger than your statistics”.) But that is only to be expected in a film about friends who insisted they were “guided by God”.The central triumvirate, even without the act of heroism, seem like perfectly decent fellows.

The film does take at least one swipe at American exceptionalism; when Stone and Sadler assert that Hitler died in his eyrie surrounded by American forces, they are soon corrected by a German tour guide: “You Americans can’t take the credit every time evil is defeated.” Still, those seeking geopolitics or any hint that US foreign policy helped forge Isis will be sorely disappointed.

Interestingly, preteen Stone keeps a poster of Clint Eastwood’s Letter from Iwo Jima on his bedroom wall. One can’t help but think that a movie chronicling Ayoub El Khazzani’s journey toward that fateful day might be more interesting and useful.

‘I feel ashamed to be Irish’ – David Brophy
7

The movie quiz: how many best picture Oscars has Disney won?
8

Love/Hate is returning to RTÉ on Friday nights. Why did we love it so much?
9