Still feisty and busy at 85, Sheila Hancock remains connected to the zeitgeist 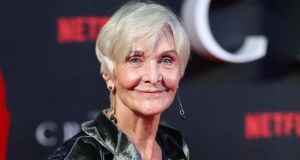 Sheila Hancock: The soaps have done a lot for that. There are wonderful parts for older women. Photograph: Mike Marsland/Getty ImagesWireImage

The solidly left-wing Sheila Hancock has been enjoying the royal wedding on the telly.

“I didn’t watch all of it, but I thought: that girl has put her imprint on this,” she says. “I imagine it has come from her: walking herself down the aisle, all that. It must have been hard in that environment. And the new atmosphere in the world has made that possible for her. She couldn’t have done it two years ago. Good on her!”

Here’s a thought. Ms Hancock is not sufficiently celebrated. Yes, she has a CBE. But she isn’t quite so lauded as Dames Judi Dench, Maggie Smith or Joan Plowright. No Dame for Sheila? What’s that all about?

It’s true that she never really got the film roles, but she has done everything else. She worked with the RSC. She did revue opposite Kenneth Williams. She was a member of Joan Littlewood’s groundbreaking company at Stratford, east London. After the death of her second husband, John Thaw, she wrote an enormously popular memoir that dispelled sentimental myths about the grieving process.

Now, at 85, still fit and lithe, her face more attractively aquiline than ever, she plays a widow who rediscovers herself while scaling mountains in Scotland. Edie is a hopeful film. In an age when older people are blamed for Brexit and younger people are decried as “snowflakes”, the picture is warmly disposed towards both ends of the age spectrum.

“I am appalled by my own generation leaving things in such a mess,” she says. “I don’t understand how anybody of my generation – who lived through a world war, whose parents lived through two world wars – could vote for something that separates people rather than uniting them. I can quite understand why my grandchildren are bloody angry. They have to live with it.”

Hancock was born, the daughter of a publican, on the Isle of Wight in 1933 and was then dragged wherever the brewery sent her hard-working father. Daniel Craig, another actor raised around and about a pub, has spoken about how the chatter and the characters get into your system. That must be useful for a performer.

“You live over the shop,” she says. “All my youth, apart from when I was evacuated during the war, I lived in a flat over the pub or in accommodation at the back. A lot of people have military backgrounds in our business. I think it’s the lack of a place. It’s the lack of safety. It feels like a more risky environment as a child. You are then not so frightened by the insecurity.”

The young Hancock  seems to have had less insecurity than most. Squinted at from a vantage point of six decades, the CV looks crowded. But she explains that, after the Royal Academy of Dramatic Arts, there were six long years doing regional repertory theatre. Agatha Christie in Bognor. J P Priestley in Southend.

By that stage, in the mid 1950s, working-class actors were beginning to break through, but Hancock still blames her slow start on lingering snobbery.

“I always felt an outsider,” she says. “When I went to the Royal Shakespeare Company, I was the only person who hadn’t been to university. I remember a very important director telling me: ‘You’re okay. You’re streetwise.’ When I went to Rada it was like a finishing school. I was on scholarship. Most of the rest were paying fees. As they are doing now.”

“I didn’t get the parts in the final shows and that’s how I ended up in rep. I did end-of-pier stuff. Comic maids. It was Joan Littlewood that changed it for me.”

It’s hard to grasp quite how much Littlewood’s company changed English theatre. It wasn’t just the gritty subject matter and the working-class talent. Championing work by the likes of Brendan Behan, Littlewood encouraged a more engaged, less formal approach to staging.

“The most socially committed and most visionary person I have worked with in my life,” Hancock tells me.

Any number of opportunities were opening up for Sheila Hancock. She got a bit of work on the telly. In 1965 she appeared in the Broadway production of Joe Orton’s Entertaining Mr Sloane. She appeared in a revue with the famously waspish, endlessly inventive Kenneth Williams.

Published after his death in 1988, that actor’s diaries are famously bitter and intolerant about a host of colleagues. Hancock is one of the few people he admits to liking. He loved her talent. And he seems to have loved her.

“Oh, but we did have terrible rows,” she remembers. “Political rows particularly. He asked me to marry him once, completely ignoring the fact that I was already married.”

And that he was gay.

“Yes, exactly,” she laughs. “Mind you, in those days I don’t think he was an active gay. It was after he met Joe Orton that he began to be really gay.”

It pays in the entertainment business to have something that nobody else has. On stage, Hancock combines an intimidating flintiness – she has the tone for Pinter – with a gift for comedy that has dulled not a shade since Harold Macmillan was prime minister. She’s funny, but there is never anything frivolous about her.

Hancock is also frighteningly honest. She and John Thaw were married from 1973 until 2002. In that period, he went from his first burst of mainstream fame in The Sweeney to a period of calm and then resurgence with Inspector Morse in the early 1990s. By the time of his death, they were twin, orbiting legends. Her book The Two of Us: My Life With John Thaw exposed the tensions in the marriage and dealt ruthlessly with her unending grief.

“Most books about grief speak about ‘the stages,’” she says. “You go through this and you go through that. It’s much uglier than that. It’s more desperate than that. Also people go on grieving for a long time and other people get bored with them. I used to get letters – I still do – from people 10 years, 20 years, after somebody has died. And they have found it impossible to put their lives together.”

The letters invariably begin “I have never done anything like this before”. Readers felt Hancock understood truths about grief that their friends and relatives failed to grasp.

Hancock admits that such feelings will never wholly wither, but she is also adamant that older people should get out and be as busy as their bodies will allow them. In that sense, she has set a good example. Like Judi Dench, Maggie Smith or Eileen Atkins, she remains madly busy into the greying years.

“I think it has improved for older actors,” she says. “I think the soaps have done a lot for that. There are wonderful parts for older women.”

Through it all, she remains connected to the zeitgeist. Hancock is not one of those older actors (we have you on a list) who rolls her eyes at mention of the #metoo movement. No generation of women has escaped the harassment.

“I remember one of my grandchildren’s father saying: ‘Oh, it’s all gone a bit too far’. And she said: ‘Since I was 11 years old I have quaked when passing a building site because people shout at me to get out my tits. I have been groped on the tube.’ I hope this has taught us to be gentle and to care for one another.”

I hope it has.

This is sort of where we came in.

It seems as if Joan Plowright (88) and Olivia De Havilland (101) have hung up their boots, but the following, like Sheila Hancock, are still busy.

Angela Lansbury (92) Dame Angela was in the recent adaptation of Little Women and has a cameo in the imminent Mary Poppins Returns.

Maggie Smith (83) The Essex girl can currently be heard voicing a character in the brilliantly titled Sherlock Gnomes.

Judi Dench (83) Dame Judi’s eyes aren’t great, but she was still up for the role of Joan Stanley, the KGB’s longest-serving agent, in Trevor Nunn’s upcoming Red Joan. Sounds great.

Eileen Atkins (83) The versatile Londoner was among the starry cast of the brilliant Paddington 2. Also recently a terrifying Queen Mary in The Crown.

Joan Collins (84) We wouldn’t forget you, Joan. Never sleeps. Has a major role in the upcoming series of American Horror Story. Can’t… wait…