Cannes 2018: our correspondent goes to the dogs

Cannes daily: on the last day of the festival, some inaccurate predictions and Terry Gilliam’s long-cherished project disappoints 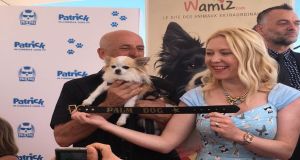 To the Grand Hotel Beach for the annual, light-hearted bash that is the Palm Dog Award. Begun in 2001 by British impresario Toby Rose, the ceremony – this year well oiled by something white and sparkling – honours the best performances by dogs in all sections of the festival.

Previously hosted by the UK Pavilion, the Palm Dog was accurately described by the Guardian’s Peter Bradshaw, giving his annual address, as “the greatest festival of Anglo-Saxon eccentricity in French public life”. President of the London Film Critics Circle Anna Smith, resplendent in a dog-print dress from Voodoo Vixen, joined Peter on the Jury and – to nobody’s great surprise – awarded the custom collar to one of the beasts from Matteo Garrone’s Dogman.

The Italian film is coming down with dogs of all sizes, but the jury eventually settled on the plucky chihuahua who gets stuck in a freezer. The veteran producer Jeremy Thomas was there to accept the award with his canine star. Having been bitten by a dog one day before leaving for France – and still wearing the bandage like a trouper – I was presented with a glass of wine by Toby himself. I am the bravest journalist at Cannes 2018.

The most common complaint among journalists here is that they’ve always missed a film they later found out they needed to see. This is hammered home most forcefully when Un Certain Regard gives out its awards. It’s not too hard to see all of the competition films. But, if you do that, you will have to pick and choose with the Official Selection’s own sidebar.

Anyway, we did see Lukas Dhont’s excellent Girl and we agree with the award of best actor to Victor Polster for his stunning turn as a ballerina going through gender reassignment surgery. Alas, we didn’t see Ali Abbasi’s Border, which took the top prize. Based on a novel by John Ajvide, who wrote Let the Right One In, it tells the story of a border guard who can smell human emotions. Neon, who distributed I, Tonya and Borg vs McEnroe, have picked up the Danish film for US distribution.

Our useless will win/should win paragraph

Hey everybody. It’s the annual piece you all hate. We fail to predict the awards that are coming your way in a few hours’ time. We are also going to tell you what we liked best from the competition. Remember that Cannes has a bizarre rule that says the Palme d’Or winner cannot win any other prizes.

They tend to avoid doubling up at all. We’ve observed that in our “will win”, but ignored it in our “should win”. Remember also that nobody has a clue about these things. If we get even a single one right we’ll be happy. Yes, we are predicting only the second female Palme d’Or winner ever. Then again, everyone predicted Maren Ade for Toni Erdmann in 2016

The prestigious Palm Dogmanitarian award has gone to Vanessa Hughes and her pet pug for inspiring the Disney comedy Patrick, starring Beattie Edmondson. A truly worthy winner of the award that celebrates canine-human friendship on screen. pic.twitter.com/Sa8hsE0cSJ

Will win: Rady Gamal for Yomeddine
Should win: Zain Alrafeea for Capernaum

Critical bust-ups come and go: the current favourite for the Palme d’Or, Capernaum, is loathed by as many critics as adore it. We name David Robert Mitchell’s Under the Silver Lake the worst film we saw. We name Cristina Gallego and Ciro Guerra’s Birds of Passage, opening film of Director’s Fortnight, as the our favourite of the 10 days. We nod to Kristen Stewart, jury member, as the key face of the red carpet. And we remember, as the Irish Times stylebook tells us, that it’s The Cannes Festival or the Cannes film festival. But it’s never the Cannes Film Festival. Just the prizes to go.

The Man Who Killed Don Quixote ★★

This review is here to confirm that Terry Gilliam’s The Man Who Killed actually exists. I have seen it. Aware that Gilliam had been through production hell, the audience at the Bazin Theatre fully expected the ceiling to fall in or a wolf to gnaw the audience’s ankles. Gilliam clearly savours the trauma. “Twenty-five years in the making and the unmaking . . . ” a legend ran before the titles. Was it worth it?

Well, “long-cherished projects” invariably disappoint when they finally make it on to screen. The kindest thing we could say is that, considering the bad luck that followed the film around, it’s a small miracle that The Man Who Killed Don Quixote is not irredeemably terrible. Indeed, some of it is actually quite good. Adam Driver is believably fuddled as a compromised movie director who gains meaning while shooting a commercial in Spain. Jonathan Pryce, star of Gilliam’s masterpiece Brazil, is genuinely excellent as a version of a version of Don Quixote. He has the long face. He has the sad, cracked voice. He can wear cardboard armour with dignity. But this thing feels patched together, cruelly compromised and worn down by the years.

If you’ve seen Lost in La Mancha, the great documentary on Gilliam’s attempt to shoot the film 18 years ago, you will have some loose idea of the plot. Driver plays, Toby, a cynical advertising man who, 10 years earlier, when still idealistic, shot a monochrome short based around Cervantes’ novel. After various fallings out with stereotypically corrupt financiers, he seeks out the original cast. His Sancho Panza is dead. His female lead (Joana Ribeiro) has fallen among exploiters in Madrid. His Quixote, a shoemaker, is still alive and now seems to think he really is that fanciful character. After more confusions, Toby finds himself fleeing across country as Sancho to the chivalrous Don.

Though Driver is all the wrong shape, those scenes are strong enough to yearn for a straight version of the novel featuring those actors. Gilliam’s trademark wide-angle lenses give their journey a spooky otherness that allows us to feel we’re in on the fantasy. But the script doesn’t seem much interested in the double delusion at the concept’s centre: the shoemaker doesn’t exactly think himself a knight; he thinks himself a man who thinks himself a knight. (Do keep up.)

The longer it goes on and the more complex it gets the less interesting it seems. The final blowout in a medieval castle feels astonishingly unfinished for a project that’s been honed over a quarter of a century. Worse still for Gilliam – who recently got in trouble for dissing #metoo – is the hollowness and hopelessness of the female characters. The film actually begins with Toby jocularly groping a crewmember. It’s supposed to be funny. Awkward timing. Awkward timing.

In competition, Kazakh writer-director Sergey Dvortsevoy, whose Tulpan wowed Un Certain Regard here a decade ago, hits the main competition with a searing rush through Moscow’s grimmest zones of exploitation. The film feels like a companion piece – and a complement – to Nadine Labaki’s crowd-pleasing Capernaum. If that film channels Dickens’s busy sentimentality Ayka gets closer to Dosteovsky’s urban pessimism (but without even a whisper of spiritual release).

The structure is pared to the bone. Samal Yeslyamova is utterly focussed as the title character, an immigrant saddled with debt incurred while attempting to establish a sewing business. We begin with Ayka’s newborn baby being wheeled to her in a busy hospital. After feeding the child, she flees and returns to the hugely overcrowded house she shares with equally impoverished unfortunates. Everything is filthy. Nobody has privacy. Everyone is on the make.

Using a mobile camera that, often behind the protagonist’s hurrying body, inevitably suggests the Dardenne brothers, Dvortsevoy follows Ayka as she moves from hopeless job to even more hopeless job. She plucks and guts chickens, but the employer flees before passing on wages. She shovels snow. She works in a veterinarian’s surgery.

Dvortsevoy’s purity of purpose breaks down a little in the last section as we are invited to draw pat (though relevant, to be fair) comparisons with how pampered pets and socially excluded humans are treated. Elsewhere, the picture is ruthless in its commitment to coolly exposing every aspect of Ayka’s descent. The question of the baby hovers in the background throughout. We are pushed in no obvious direction. She may think the child is better off without her. She may have made a coolly rational decision to further her own ambitions. What does become clear is that, when ploughing through the lower depths, conventional notions of morality can be hard to sustain.

A tough, lean, gripping tale that permits no compromise.