On Chesil Beach' directed by Dominic Cooke stars Saoirse Ronan and Billy Howle. The film is based on Ian McEwans adaptation of his 2007 Booker Prize-nominated novella of the same name. 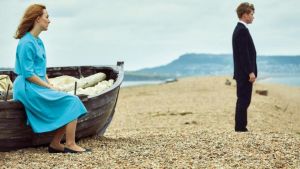 On Chesil Beach: a solid exercise in applied sadness

If you want a sense of the cultural distinction that once existed between England and the United States you could do worse than set Dominic Cooke’s On Chesil Beach beside George Lucas’s American Graffiti. Though both are set in the summer of 1962, they could hardly spread more contrasting odours. Lucas’s film is fired with fast cars, good rock ‘n’ roll and a surging desire for sex. On Chesil Beach certainly has rock ‘n’ roll in it, but, in the story’s main body, Edward (Billy Howle), a recent graduate with ambitions to write, treats the music with a dry academic rigour and seems at least as interested in the then-fashionable trad jazz. Cars do no more than get you where you want to go. And sex? Well, as the many admirers of Ian McEwan’s source novel will know, On Chesil Beach is to sexual inhibition as Moby Dick is to whales.

“Sexual intercourse began in nineteen sixty-three,” Philip Larkin famously wrote. Edward and Florence (Saoirse Ronan) were, it seems, just a little premature in their lurch towards marriage. What’s that you said? Other things are premature here? You’re letting yourself down.

Unlike the awful honeymoon around which the story rotates, On Chesil Beach is not a disaster. Ronan turns in a strong performance as the daughter of a snobbish academic (Emily Watson) and an abusive businessman (Samuel West) who, when not scowling at other members of her string quartet, falls for someone a little less well off. (On hearing that Edward has just graduated from University College London, her mum, a colleague of Iris Murdoch, sniffs that it educates “the sons of tradesmen”.) The transformation from Saoirse’s turn in Lady Bird could hardly be more marked: coiled throughout like a bound umbrella, her voice lowered significantly in register.

Though the temptation to call him “Nearly Redmayne” is close to overwhelming, Billy Howle is also strong as the befuddled, earnest grammar-school boy. There is a spark between the actors. But it is deadened by reticence.

The picture has some wry fun with the dampness of British life. The food served in their hotel room looks grey and awful, but the sniggering waiters still insist upon “silver service”. The film-makers allow no hint that culture is about to change.

For all that, there is a sense that On Chesil Beach has gone off half-cocked (sorry). One tiny outbreak of carelessness takes on the character of synecdoche. It is pressed home that Florence is the child of hyper-snobs. Yet she holds her knife as if it were a pen. Such people would be as likely to do that as eat peas with their bare hands. A weird tennis match between Edward and his future father-in-law ends in too vague a hint at sinister secrets.

Most damagingly, McEwan’s own script cannot find a cinematic substitute for the sharp prose that helped us understand how sexually bewildered adults could then be. We have, in the decades since 1962, been so bombarded with sexual imagery that the film’s central premise proves too hard a sell.

On Chesil Beach remains a solid exercise in applied sadness. Few will be entirely unmoved. Few will be wholly satisfied.