Review: Comedy of disappointment as hero is the architect of much of his own bad luck 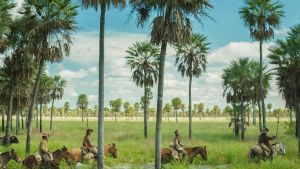 Lucrecia Martel’s arid-dry comedy-of-disappointment starts as it means to go on. Don Diego de Zama (Daniel Giménez Cacho), an 18th century magistrate in the employ of the Spanish crown, poses heroically in his tricorder hat on a far-flung Argentine shore, before retreating into the rocks so that he might spy on some local women having a mud bath.

“Voyeur!” they cry, as they chase him away. He responds by slapping one of them.

His capacity for brutality against the natives is matched by the crawling servility he reserves for his superiors.

Zama, we soon realise, is the architect of much of his own bad luck, but that’s not to say that the universe isn’t frequently taking a pop at him for good measure. His affections are toyed with by a local noblewoman. He spends years hoping for a transfer to Lerma, where his wife and son await. The deliverance he seeks is ultimately handed down to an enemy as a punishment. He’s even thwarted and upstaged by a llama.

The ever-descending illusory “Shepard tone” sounds often, articulating both Zama’s psychological decline and his stasis. A cartoon coloniser, the locals have the better of him: one servant leads him to stumble on a sexual encounter between the woman he is pursuing and his romantic rival.

Textured, slow-burning and hypnotic, the most resolutely arthouse release since Hard to Be a God unfolds as a fever dream. A tortured young man relates a story about a fish that fights water. A travelling merchant called The Oriental brings brandy and the plague. The magistrate wears ears on a string around his neck that allegedly belong to the mysterious bandit Vicuña Porto.

Zama is adapted from the existential 1956 novel of the same name by Antonio di Benedetto, a book that was not translated into English until 2016, adding to the sense of revelation. Working with cinematographer Rui Poças, Martel, who hasn’t made a feature since The Headless Woman a decade ago, has transformed the source material into a stunning piece of pure, hallucinogenic cinema.

It’s impossible not to think of Kubrick’s similarly epic (and capriciously fated) Barry Lyndon, but the strangeness and Beckettian frustrations of the halting drama make for a unique viewing experience.