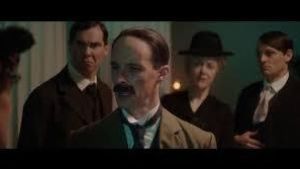 The docudrama, as fans of trash TV can attest, is an unlovely thing that is often hastily cobbled together to capitalise on a recent death or upcoming wedding. Typically docudramas cast somebody who looks nothing like George Michael as George Michael and feature dialogue like: “I love you, Kate Middleton!”

By any reasoning, Thaddeus O’Sullivan’s hybrid portrait of the art collector and gallery founder Hugh Lane simply shouldn’t work. The film’s marriage – or rather ménage – of talking heads, artistic flâneurism, and historical recreation ought to make for a screaming match, or at the very least uneasy transitions. But working from Mark O’Halloran’s fiendishly clever script, the December Bride director and dexterous editor Mick Mahon have fashioned a project as elegant as its subject.

Having scoured old letters and biographies, O’Halloran has plucked out the choicest (and often cattiest phrases) used by Lane and his Celtic Twilight contemporaries.

Tom Vaughan-Lawlor, having already enlivened our understanding of Irish history with his depictions of PJ Mara and Pádraig Pearse, is a wonderful constellation of contradictions as Hugh Lane.

These excerpts aren’t merely rehearsals of turn-of-the-century arguments. There make for both dynamic, relevant exchanges and moving moments. One understated, succinct sequence, wherein Lane has his estranged father to sit for a portrait, ought to be mandatory viewing for anyone seeking to embark on a dreary cradle-to-grave biopic.

The long-running campaign to recover Lane’s bequest of 39 paintings for Ireland – including works by Monet, Renoir and Manet – allows this ingenious film to potently inhabit different centuries, as do genuinely fascinating contributions from historians Roy Foster, Paul Rouse, and Morna O’Neill.

As ever, cinematographer Kate McCullough’s sense of space – and what some might call aura – is unrivalled. Hugh Lane Gallery is traversed with the same reverence and clarity that she brought to The Quiet Architect. Why hasn’t she been snapped up by one of the major franchises yet?

Make a date and mull over an aesthetically pleasing alternative Irish history.

Bookshops and Covid-19: ‘We can’t say to people you can’t look at the books’
3

Normal People: Full-frontal nudity was not its most radical feature
10