The Life Ahead, Martin Eden, Jingle Jangle: A Christmas Journey, Two of Us 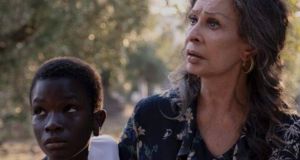 Ibrahima Gueye and Sophia Loren in The Life Ahead

THE LIFE AHEAD/LA VITA DAVANTI A SÉ ★★★★☆
Directed by Edoardo Ponti. Starring Sophia Loren, Ibrahima Gueye, Renato Carpentieri, Iosif Diego Pirvu. Netflix, 94 min
Sophia Loren (you read that right) plays an ageing former sex worker taking care of a young tearaway (Gueye, excellent) in an effective sentimental film by the great woman’s son Edoardo Ponti. The plot progresses along a familiar arc, but Loren and Gueye keep it aloft with beautifully complementary performances. He is all fire and fuss and ferment. She is as steady and unshakable as a tower of beautifully aged stone. If the Academy doesn’t give her that much-rumoured best actress nomination they deserve to be collectively horse-whipped. DC

Wildly ambitious adaptation of Jack London’s autobiographical novel concerning a young autodidact’s efforts to succeed as a writer. The tragic romance of the source material is amplified by the gorgeous, textured 16mm photography. In theme and appearance, Martin Eden straddles such Italian cornerstones as DeSica’s Bicycle Thieves and Bertolucci’s The Conformist. It’s a sweep of cinematic history earned by the film’s aspirations. No film could replicate the tragic weight of London’s work, but this comes close. TB

If you were hoping for a Christmas movie based around The Auld Triangle – perhaps a Dubliners jukebox musical – then you will have to hope a little longer. Jingle Jangle: A Christmas Journey turns out to be the chaotic, over-stuffed, exhausting consequence of Netflix throwing every seasonal trope at their house-bound audience and seeing which survive immersion in a closing shower of warm eggnog. The plot involving an impoverished toy maker is pretty threadbare, but the fine songs, strong African-American cast and top-notch choreography keep the seasonal spirits merry. DC

There’s an extraordinary two-step at the heart of Meneghetti’s heart-breaking debut feature as veteran actors Sukowa and Chevallier step into the plum roles of their respective careers. Following on from last year’s The Heiresses, Two of Us concerns two retired lesbians. For decades, Nina and Madeleine have been passionately and secretly in love. As neighbours, they roam between each other’s apartments. The love between these characters – a bond framed with elegance and due care by Aurélien Marra – resonates powerfully. TB