Review: A combination of high Disney gloop with Hamilton hip-hop 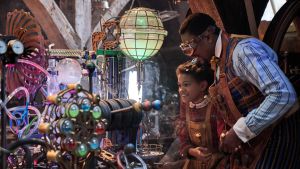 “All along the banks of the Royal Canaaaaaal!”

If you were hoping for a Christmas movie based around The Auld Triangle – perhaps a Dubliners jukebox musical – then you will have to hope a little longer. Jingle Jangle: A Christmas Journey turns out to be the chaotic, over-stuffed, exhausting consequence of Netflix throwing every seasonal trope at their house-bound audience and seeing which survive immersion in a closing shower of warm eggnog.

Combining high Disney gloop with bourgeois Hamilton hip-hop, the picture will probably become a Yuletide staple. The largely African-American actors are consistently strong. The musical numbers by Philip Lawrence, Davy Nathan and Michael Diskint are good enough to develop independent lives outside the film. And, let’s be honest, almost any old reindeer and trap with “Christmas” in the title will endure.

That acknowledged, Jingle Jangle looks to have been constructed by a committee at Netflix’s Lapland office. The characters have no angles. There is a great deal of set-up but nothing you could fairly call a story. Seasonal ads for German discount supermarkets have greater emotional resonance.

As you may have already guessed, like almost all Christmas movies, Jingle Jangle follows the rough pattern of A Christmas Carol. This time round, Forest Whitaker is the older, grumpier gentleman who needs to be reminded of the joy that Yuletide can bring. Lovely old Phylicia Rashad, wrapped up in red velvet folds, is here to tell a pair of cherubic children how he got that way.

They cuddle up to her flanks – Christmas tree sparkling by the window – as she opens a volume and talks us back to the early days of Jeronicus Jangle’s magic toy store. It seems the young Mr Jangle (initially Justin Cornwell), an inventor of genius, fell out with his protege, Gustafson (Miles Barrow), and, after that assistant fled with his designs, lost his family and settled into a life of gloomy regret.

In the present day, some hope of redemption sparks when Mr Jangle’s granddaughter returns to poke him into positivity. But the economics are still against him. Gustafson (now Keegan-Michael Key) is living in vulgar luxury and the local bank manager (Hugh Bonneville in an ambiguously written role) explains that unless Mr Jangle can produce a hit toy by Christmas the shop will finally close.

David E Talbert, writer and director, hasn’t mastered the slip from high emotion – distress, anger, elation – to lyrical transcendence that characterises breaks into song during the best film musicals. The first big number is a “believe in yourself” tune that, though excellent in itself, emerges from modest interest in an imminent technological advance.

This keeps happening throughout the picture. We suddenly find ourselves in beautifully staged, spectacularly choreographed set-pieces that blast out the tepid storytelling on either side.

The wider fictional universe could have done with a little more work. As ever (thanks again, Mr Dickens), we are in a sub-Victorian version of England – a pointedly anachronistic “Royal Mail” van drives on the left – that is forever trapped in snowy mid-December. But we are also in the cleaned-up, idealised, turn-of-the-century Nowhere that inspired the street furniture in Disneyland’s Main Street USA. Even the tiniest smidgeon of original world-building would have been welcome.

Yet, despite these irritations and a few others (the encouragement of Stem studies for young women is as clunky as it is commendable), Jingle Jangle just about gets by on the classiness of its production values. It feels like the sort of entertainment that will play forever in the background as crackers are unpacked and Brussels sprouts are rinsed. Few producers ever lost their shirt by betting on the Yule.

On Netflix from November 13th

8 Welcome to the child sex capital of Europe