Relic, Shirley, The Witches, The Painter and the Thief 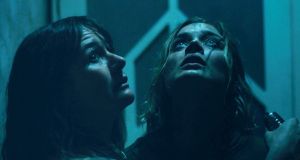 RELIC ★★★★☆
Directed by Natalie Erika James. Starring Emily Mortimer, Robyn Nevin, Bella Heathcote, Steve Rodgers. VOD, 89 min
The fractured family at the heart of this discombobulating new horror has, inevitably, led to comparisons to Hereditary. When Kay (Mortimer) learns that her elderly mother is missing, she and her daughter Sam (Heathcote) drive to granny’s remote, forest-bound home to investigate. Edna (Nevin) finally reappears with no recollection of where she has been. Spooky doodles and spidery notes suggest that the older woman is succumbing to Alzheimer’s. Kay and Sam, shouldering familial guilt in different ways, bicker over Edna’s care arrangements. Meanwhile, the house, in common with its elderly occupant, seems to be losing the run of itself. One of the year’s best horrors. TB

Rose (Young) is initially terrified of the famous writer Shirley Jackson (Moss). But after several outbursts and salty encounters, Shirley bonds with the younger woman. Their relationship is quasi-carnal and definitely carnivorous. Rose becomes Shirley’s muse in the writing of Jackson’s 1951 Gothic novel Hangsaman, and their fractured, marginalised lives start to bleed between fact and fiction. The playful, learned, duplicitous script is an homage to all things Jackson – a complete fiction that is slavishly faithful to her work. Decker’s formally subversive, unrepentantly feminist filmmaking makes for something like Jackson herself: a prickly, intriguing original that doesn’t give a damn what you think. TB

This ritzy new adaptation of Roald Dahl’s novel doesn’t skimp on the author’s dark musings on mortality. The faithful final act is a surprise following the Looney Toons shenanigans that have gone before. In stark contrast with Nic Roeg’s 1990 version, Zemeckis’s film plays the violence and danger for laughs. The bones of the plot remains the same: an orphaned boy (hugely likable Jahzir Kadeem Bruno) and his folk remedy-dispensing grandma (Spencer), arrive at a holiday resort where a convention of conjurors – under the command of the fiendish Grand High Witch (an outrageously cartoonish Hathaway) – plot to turn children into mice. Diehard fans of the Roeg version may fume, but this is a safer bet for younger Halloweenies. TB

In April 2015, two oil paintings were stolen from Oslo’s Galleri Nobel. For Barbora Kysilkova, the struggling Czech artist who painted the outsized, photo-realistic pieces, the theft represented an incalculable loss. The culprits were swiftly apprehended and one of them – a junkie named Karl Bertil-Nordland – said he stole the painting “because they were beautiful”. Perhaps this remark flattered the artist, but Kysilkova, feeling “a sort of obligation to continue the story”, asks to meet the perpetrator. And then she asks if she can paint him. The film chronicles the strange friendship that follows. One can’t help but puzzle over some of the “big scenes” – perhaps there’s more than one artistic swindle at the heart of this intriguing doc. TB