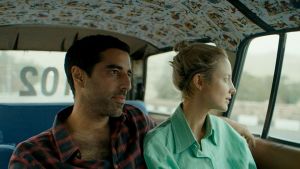 Set against the backdrop of the Egyptian city of the title, this is writer-director Zeina Durra’s second feature. It concerns Hana, a weary doctor and British aid worker seeking respite after a stint at a clinic on the Jordan-Syria border. “I’m broken,” she says at one point. “ I can’t take any more pain.”

Her first night at the luxurious Winter Palace Hotel involves alcohol and an ill-advised sexual fumble with a loud-mouthed American. Mostly, Andrea Riseborough’s Hana is a deadened, pale and scrawny presence, wandering around the city in clothes that no longer fit, as physically delicate as she is emotionally fragile.

“I didn’t think you were here,” she tells Sultan (Karim Saleh), an archeologist and ex-boyfriend she bumps into on a Nile cruise boat. She likely came to Luxor to look for him: his profession acts as an allegory at the heart of this understated drama. Or perhaps she is seeking something else. A group of older women offering a spiritual tour around the ancient stones and hieroglyphics are viewed at first with scepticism and then with curiosity.

Enigmatic chapter cards – one reads “The Grateful Dead: Hotel Garden” – do little to shape the narrative. Luxor chronicles a healing process that is as ill-defined as the heroine’s wardrobe. A drunken, floor-bound dance offers a visible release, albeit not the most sensible or healthy outpouring.

It’s not perhaps the film we were expecting from Durra, who directed and co-produced the snappier The Imperialists are Still Alive (2010). And the film’s geographical and emotional flânerie can feel aimless. Save for a glimpse of a metal detector at the hotel, the film frustratingly resists political engagement with the complicated city.

Riseborough, a versatile enough performer to play both Margaret Thatcher (The Long Walk To Finchley) and an IRA activist (Shadow Dancer), here works in small movements from under a stricken, frozen frame.