The Life Ahead: It’s time to give Sofia Loren that Oscar nomination 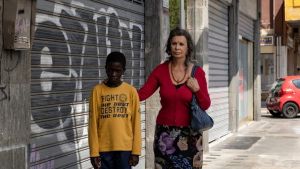 Film Title: The Life Ahead

Early on in Edoardo Ponti’s sentimental drama, the indomitable Sophia Loren – the director’s mother and, let us reiterate with emphasis, Sophia Loren – rests a fist on either hip and turns her proud face aggressively towards the supporting cast. Fifty years fade away as her posture rhymes with those in a dozen classics from distant eras. One could scarcely feel more moved if Garbo emerged from neighbouring shadows.

Loren’s stoic performance is, of course, the main reason to watch this Netflix acquisition, but Ponti’s adaptation of a Romain Gary novel – filmed as Madame Rosa in 1973 – has much else to recommend it. Humane attitudes illuminate a story that connects with many contemporary discontents. Ibrahima Gueye, a young newcomer, manages to hold his own against a legend over 70 years his senior. Gabriel Yared’s music is lovely enough to excuse its lachrymose undertones (this is exactly the sort of midranking Italian film that would once have generated a superior, swelling Ennio Morricone score).

Loren plays Rosa, a former sex worker in a busy Italian city who takes care of wayward children. Young Momo (Gueye), from a broken home, has been living with a kindly doctor, but is now becoming too much to handle. Shortly after robbing Rosa at the market, he is brought round to apologise and, after some snorting and sniffing, ends up under her charge. Conflicts abound. Momo has been dabbling in drug dealing and – more efficient than slower, older soldiers – has secured a rising position in the local crime cabal. The script also kicks up social and religious tensions. It soon becomes clear that Rosa is Jewish and of an age to have lived through the Holocaust.

You probably know where this is going. Initial frictions gradually give way to affection and respect. The supposed religious differences between Rosa and Momo never amount to anything more than a background mumble. They are similarly damaged souls at different ends of life’s troubled path. Ponti, also the screenwriter, drops a few aesthetic clangers along the way (the least said about the CGI lioness that supports Momo the soonest forgotten) in a film that doesn’t pretend to neo-realism, but Loren and Gueye keep it aloft with beautifully complementary performances. He is all fire and fuss and ferment. She is as steady and unshakable as a tower of beautifully aged stone. If the Academy doesn’t give her that much-rumoured best actress nomination, they deserve to be collectively horse whipped.

On Netflix from October 13th