Review: Director makes no concessions to those with no knowledge of regional politics 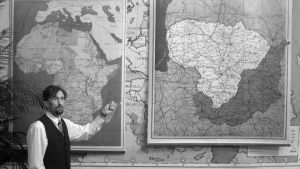 It’s 1938 and the young Lithuanian state is marking 20 years of independence against a European backdrop that is looking decidedly dicey. War looms and, in a stroke of spectacular misfortune, Lithuanian border guards have shot a Polish soldier.

News of this powderkeg situation reaches fictional president Palionis (Valentinas Masalskis) as he is dispensing sabres and patriotic words at a military academy graduation ceremony. The perennially grave-looking prime minister Jonas (Vaidotas Martinaitis) is as stumped as his military adviser Svegzda (Julius Zalakevicius). Flying in the face of the president’s “no Vilnius, no rest” rhetoric, his colleagues suggest that concession is the only path.

On a nearby university campus, geographer Feliksas Gruodis (Aleksas Kazanavicius) has come up with a novel – or possibly bonkers – safeguard against would-be invaders. As the logical terminus to his theories on population density, Gruodis proposes creating a “backup Lithuania” somewhere overseas – Brazil, Angola, and Quebec are options – a Lithuanian colony where the country’s inhabitants could relocate in the event of war. At a politically-charged moment this might just be the modest proposal the political elite want to hear.

Inspired by a genuine historical proposal to create a Lithuania B by purchasing land in Africa, writer-director Karolis Kaupinis’s clever screenplay makes no concessions to those with no knowledge of regional politics. That instinct runs counter to his deadpan dramatisation of competing capitulations.

A scene which recounts how Kaunas – the temporary Lithuanian capital – reclaims Vilnius from Poland is played for maximum drollery. And the national catastrophes are paralleled by Gruodis’s imploding domestic arrangements.