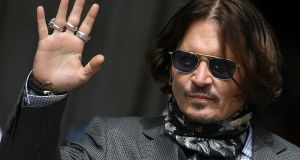 Actor Johnny Depp said he plans to appeal a ruling by the UK high court in a libel case he took against the publisher of the Sun newspaper. File photograph: Daniel Leal-Olivas/AFP via Getty Images

Actor Johnny Depp said he has agreed to resign from the Fantastic Beasts film franchise after the UK high court ruled he assaulted his ex-wife Amber Heard.

The actor said he plans to appeal against the “surreal judgment” of the court which earlier this week concluded that he assaulted Heard.

The 57-year-old sued the Sun’s publisher, News Group Newspapers (NGN), over a 2018 article which labelled him a “wife beater”.

Depp wrote on Instagram: “My resolve remains strong and I intend to prove that the allegations against me are false.

“My life and career will not be defined by this moment in time.”

He added: “The surreal judgment of the court in the UK will not change my fight to tell the truth and I confirm that I plan to appeal.”

Depp said he had been “asked to resign by Warner Bros from my role as Grindelwald in Fantastic Beasts and I have respected that and agreed to that request”.

He added he would like to thank “everybody who has gifted me with their support and loyalty”.

“I have been humbled and moved by your many messages of love and concern, particularly over the last few days,” he added.

“We thank Johnny for his work on the films to date.

“Fantastic Beasts 3 is currently in production and the role of Gellert Grindelwald will be recast.”

Depp brought legal action against NGN over a column by the Sun’s executive editor Dan Wootton in 2018, which referred to “overwhelming evidence” that the actor attacked Heard (34) during their relationship.

Wootton asked how Harry Potter author JK Rowling could be “genuinely happy” that Depp had been cast in the latest film in the Fantastic Beasts spin-off franchise amid the allegations by Heard.

In a ruling on Monday, Mr Justice Andrew Nicol dismissed the Pirates Of The Caribbean star’s claim, saying NGN had proved what was in the article to be “substantially true”.

He found that Depp assaulted Heard on a dozen occasions, putting her in “fear for her life” during three of them.

In a statement after the ruling, Depp’s solicitor Jenny Afia, from the Schillings law firm, said: “This decision is as perverse as it is bewildering.

“Most troubling is the judge’s reliance on the testimony of Amber Heard, and corresponding disregard of the mountain of counter-evidence from police officers, medical practitioners, her own former assistant, other unchallenged witnesses and an array of documentary evidence which completely undermined the allegations, point by point.

“All of this was overlooked. The judgment is so flawed that it would be ridiculous for Mr Depp not to appeal this decision.”

The court heard evidence from both stars, along with their friends and relatives and several former and current employees. – PA

The misunderstood, useless and brilliant artists of the Irish diaspora
9