Two of Us: Elegant story of a love that cannot speak its name

Review: Barbara Sukowa and Martine Chevallier in the plum roles of their careers 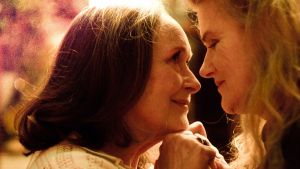 Film Title: Two of Us

There’s an extraordinary two-step at the heart of Filippo Meneghetti’s heartbreaking debut feature as veteran actors Barbara Sukowa and Martine Chevallier step into the plum roles of their respective careers.

Two of Us concerns two retired lesbians. For decades Nina (Sukowa) and Madeleine (Chevallier) have been passionately and secretly in love. As neighbours they roam between each other’s apartments. Thus, Madeleine has never felt a pressing urge to tell her adult children. She and Nina have made plans to sell Nina’s apartment and to move to Rome, where they “can be who we want” for their remaining years. But Madeleine gets cold feet, thereby enraging Nina.

When Madeleine, possibly as a response to the blow-up, suffers a debilitating stroke, Nina, who has no official designation beyond “friendly neighbour”, finds herself cut off from her life partner. Madeleine, who has lost the ability to speak, has no way to tell her interfering adult daughter (Léa Drucker) about her preferred, longstanding living arrangements.

Meneghetti’s screenplay, written with Malysone Bovorasmy and Florence Vignon, successfully negotiates this transition from domestic drama, replete with impromptu dances and small routines, into something like a thriller. But it’s the love between Sukowa and Chevalier’s characters that stays with the viewer. A woman’s picture in the Hollywood golden era sense of the term, and every bit as elegant and tear-jerking as that sounds.