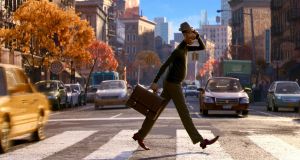 Soul features Joe Gardner, an aspiring professional jazz pianist, who, after losing his footing, is transported to the Great Before: a place where new souls get their personalities.

Following a few years of sequels that nobody asked for – looking at you, Cars 3 and Toy Story 4 – Pixar Animation Studios is back on top form with Soul, a wildly original vision of the afterlife from the creator of Up.

To date, the studio that gifted us Woody and Buzz has crafted family films around such unlikely conceits as monsters sustaining themselves on the fear of children, antiquated toys that come to life at night and a world where cars have their own pope. Soul’s metaphysical adventure fits right in.

As Kemp Powers, the co-director of Pixar’s 23rd feature, Soul, says: “I genuinely think that a lot of the stories we work on at Pixar would not get greenlit anywhere else. If it’s too safe, it’s a harder pitch to get past the Pixar brain trust. When you’ve made movies about talking rats wanting to cook and flying a house to South America, you can’t come in there and pitch with: boy meets girl.”

Even so, director and animator Pete Docter, known for his work on Monsters Inc and Inside Out, is surprised to find himself evaluating Being and Nothingness – and himself – on the promotional trail for Soul.

“As a kid all I wanted to be was an animator,” he says. “My friends were playing soccer, going on dates and I was in my room making cartoons. I went to a school founded by Walt Disney and I was lucky enough to start at Pixar in 1990 and help to create Toy Story. Animation is what I was born to do. And yet there are some days I find myself thinking: ‘Really? Cartoons? This is what I’m doing with my limited time on Earth?’

“So I did a lot of research. I thought about essentialism which, in the West, is an idea that comes from Plato and Aristotle: that you’re born with an essence of who you are and your job in life is to discover that. And then there’s nihilism and Nietzsche saying there is no such thing as meaning, it’s all purposeless and absurd. And then there is Kierkegaard and Sartre and existentialism and the idea that you have to decide for yourself what your purpose is all about. And in the new film we get to put those things into characters.”

Soul, which is released on Christmas Day through Disney Plus, introduces Joe Gardner (voiced by Jamie Foxx), a middle-school band teacher who has always dreamed of becoming a professional jazz pianist. When he’s offered a once-in-a-lifetime opportunity to play with one of the jazz greats, his excitement causes him to miss his footing.

It is a plot that required a great deal of cultural sensitivity. Soul is the first Pixar film to feature an African-American protagonist, a development that was inspired by a story from pianist Herbie Hancock. Watching a masterclass video with Hancock, Docter was taken with an anecdote about playing a wrong note on stage with Miles Davis.

“Miles took a breath and he played some notes and it made my chord right,” said Hancock. “It sounded like magic to me. It took me years to figure out what actually happened. Here is what happened: Miles just accepted it as new and he did what any jazz musician should always try to do – to make anything that happens into something of value.”

Once the creative team decided that Joe should be a jazz musician, they met with one of the film’s musical consultants, Dr Johnnetta Cole, who described jazz as “black improvisational music”. That prompted the decision to make the character black.

Soon thereafter, Powers (known for his work on Star Trek: Discovery) was recruited by the team. He ended up co-directing with Docter. Powers, a former music critic and jazz lover, was instrumental in shaping and inspiring Foxx’s character.

“I sat down and wrote out my own personal experiences on paper,” says Powers. “So Joe is 40, I’m 45. Joe lives in New York, which is my hometown. He’s from Queens and I’m from Brooklyn. I used to be a music critic and a musician and my son is named after Charles Mingus. One place I spent a lot of time before the pandemic was the barber shop so we took a crew there. We went to New York for research trips.

“We visited a public school with a jazz programme in Queens. We visited a bunch of jazz clubs. It’s important to understand I don’t represent everything about a black person’s experience. It was important that we had a number of consultants that we kept close throughout the process. People like Bradford Young, the cinematographer who consulted with our lighting team on the look of the film, and Daveed Diggs and Questlove, two performers in the film who also acted as cultural consultants.

“This was not a rubber-stamping situation. A lot of people contributed to what we call our internal culture trust to ensure that our representation of African-Americans was as authentic as possible.”

Diggs concurs: “They had long discussions and every word would get written down, follow-up questions would be asked. It was really impressive to see the care with which they tried to craft this piece and to make sure that they heard from a wide variety of people. There are so many ways to be black. In animation, you risk creating something that feels like a caricature and saying: ‘This is black.’ But there’s a real diversity of experience in this movie.”

The soul isn’t the prettiest spectacle in art, especially not in the afterlife. Most visual representations lean towards the hellish. A horned creature devours sinners, then excretes them in the corner of Giotto’s The Last Judgment. A skeleton swirls the screaming – and sometimes disembowelled – damned in Jan van Eyck’s 15th century diptych. Souls are subjected to surreal tortures in Hieronymus Bosch’s The Garden of Earthly Delights. Writhing and contortion dominate in William Blake’s The Punishment of the Thieves and Franz von Stuck’s Inferno.

“Our first problem was: what does a soul look like?” says Docter. “We did a lot of research, looking into the teachings, many philosophies and traditions around the world and what we found most was people described the soul as vapour, nonphysical, formless, breath, air. All very interesting but not very helpful because how do you draw air?”

“We needed something that suggested nonphysical but in a way that we could put on screen,” says Soul’s producer Dana Murray. “With this in mind we started to explore what a soul might look like, which was not so easy. A lot of different artists at Pixar had a crack at this and they came up with very cool ideas. But we felt like we needed more facial features for expressions. So we found aerogel and we came back to this early drawing that Pete did. It was ephemeral but it also had a face.”

An additional set of sensitivities hung around the potential “religious landmine” as Murray calls it.

“We wanted to talk about a lot of the spiritual issues that these religions evoke without saying one religion is right and one religion is wrong,” says Docter. “We didn’t look to a single religion. There are so many different religious beliefs. You know I think one that did surprise me was Buddhism. Because Buddhism doesn’t really believe in the soul in the same way that we do in western cultures.

“The concept of Brahman got very confusing to me. It was one of a couple of different concepts that I needed to learn more about. But in the end we decided – for the sake of simplicity – that we were just going to do this dualistic version of the soul, where you have the body and the spirit.

“It’s more of a philosophical discussion about purpose and about the reason for existence than a theological one. What is it we’re doing with our lives is a question that transcends the specificity of different religious beliefs. It allows us to talk about life experiences and the meaning of existence.”

Docter laughs: “It sounds like a perfect idea for a kids’ movie, doesn’t it?”

Soul is on Disney Plus from December 25th