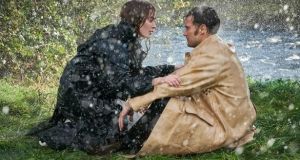 The director of Wild Mountain Thyme has defended the accents in it, saying that a normal Irish accent would be too difficult for an international audience to understand.

John Patrick Shanley’s romantic comedy based on his own play Outside Mullingar has received much derision in Ireland on social media, based just on the trailer, with even the Leprechaun museum tweeting that it was too much.

Irish Times film critic Donald Clarke wrote that the opening shots of the trailer “feel so close to parody one half suspects an editor is having a laugh during his last day on the job. Over shots of cliffs and babbling brooks, a twinkly voice intones the words ‘welcome to Ireland’. It is elderly farmer Christopher Walken and he is here to tell us about the tension between Rosemary and his son Anthony.

“Apparently young Anthony asked ‘questions of the stars’ while Rosemary – ‘besotted with love’ – walked confidently up to horses. As an adult, Anthony speaks in the same dew-drenched romantic clichés that Chicagoans spell out in bacon and cabbage before dyeing the river green on St Patty’s Day [sic]. ‘Oh, when he says dose tings!’ Rose says before staggering off to the boreen in shawl and hobnail boots.”

Speaking to Variety magazine, Shanley said that if the characters sounded exactly as his Irish relatives spoke, no one would understand them. “You have to make the accent more accessible to a global audience,” he explained.

He has also told the magazine that the film, which cost $5.5 million to make, took more than two years to finance.

He hopes it will be the sort of feel-good low-budget romantic comedy that becomes popular as a result of word-of-mouth.

The film’s lead actors Jamie Dornan and Emily Blunt worked with the dialect coach Brendan Gunn to perfect their accents.

Dornan has, in particular, been the subject of a ridicule given that his Irish accent sounds more like a Hollywood actor trying to pull off an Irish accent, even though he is Irish.

According to Variety, Dornan, who grew up in Belfast, wanted to sound less metropolitan, which is why he does not speak in his normal voice.

The film was shot in and around Ballina. “What’s interesting about shooting in rural Ireland where we were, it is like another time,” Dornan told Variety.

“It’s about the simple things and living off this farm, and that being the main focus of your day.”

Blunt says of Dornan that she found him to be “utterly charming in this role and so willing to look silly and be silly and be breathtakingly uncomfortable in his own skin”.

Mr Shanley offered the role to Dornan without asking for an audition, after a short phone call. “I started from the place of ‘I want a dark, brooding romantic lead’,” Mr Shanley says.

“As I looked at the landscape of international English-speaking actors, I couldn’t find anybody that fit the bill as well as Jamie. He is already thought of as connected with romance – perhaps more lurid than I was going to do.”

Mr Shanley expressed a hope that nobody will get Covid-19 going to the cinema in the middle of a pandemic to see the film.

“I want everybody to be OK. I think we’re about to enter into an absolute bloodbath nightmare on a national [US] level. You shouldn’t watch it looking over your shoulder, asking: ‘Am I contracting a serious illness to see the film?’”