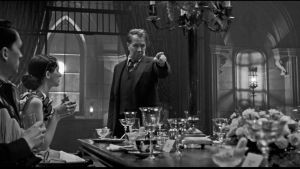 Care to see a subplot concerning the corporate conspiracy that featured in socialist muckraker Upton Sinclair’s bid to become the governor of California? Of course you do.

But even swooning movie fans will recognise that Mank’s central conceit is the same old hooey once peddled by Pauline Kael in her 1971 book-length essay, Raising Kane. Mank, like Kael, postulates that screenwriter Herman J Mankiewicz was the author of Citizen Kane, a theory that has been subsequently debunked and, well, demolished.

Fincher, nevertheless, wants us to smirk – or possibly cringe – at the early scene in which Gary Oldman staggers on to an MGM film set as hungover (probably still drunk) screenwriter Herman J Mankiewicz (Mank for short) and Louis B Mayer asks who he is, to which Irving Thalberg replies: “Just a writer.”

The use of screenplay slug lines to establish time and place – “EXT. VICTORVILLE — GUEST RANCH — DAY — 1940” – add to the reverence accorded to the writer. The screenplay, however, for all its knowledge and many tricks, struggles to accommodate its expansive research. The self-consciously hard-boiled dialogue adds to the project’s meta-textual clout and jollies the film along, even when characters introduce themselves with job descriptions or pullquotes from Wikipedia entries.

Too often those onscreen overshare to a pathological degree. (Do we really need to know so much about the husband of Mank’s secretary?) The central conflict between Mank and Orson Welles (Tom Burke), the boy wonder summoned to Hollywood on the back of his wildly successful career in radio and theatre, is curiously downplayed.

A subplot concerning Mank’s friendship with showgirl-turned-starlet Marion Davies (Amanda Seyfried) and her sugar daddy William Randolph Hearst (an imperious Charles Dance) is as fascinating – and surprisingly sympathetic – as it is arresting. A giddily unhinged sequence, requiring some 100 takes, drunkenly shuffles into Heart-of-Darkness territory.

The dream factory is a nightmare. Whoever could have guessed? Everyone?

Mank is on Netflix from December 4th