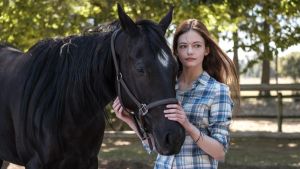 This Black Beauty works well enough as a bank-holiday entertainment in the style of mid-20th century Disney television.

One can easily imagine the world’s Black Beauty stans –“Beebies”, perhaps? – reacting with cautious optimism to the news that Kate Winslet was to voice their favourite horse in a feature adaptation for various international producers. Iain Glen would surely also ruffle few feathers as one of the various nag professionals who supervise Beauty throughout her often unhappy journey across Victorian Britain. We liked him in Game of Thrones.

Prepare the smelling salts. It seems the 565th version of Anna Sewell’s horse opera takes place in the contemporary United States. Black Beauty is now apparently a mustang. This is like reimagining Jemima Puddle-Duck as a rootin’ tootin’ gun-slingin’ fowl on the Oregon trail. Right?

Not really. If you can edge thoughts of sacrilege from your head, this Black Beauty works well enough as a bank holiday entertainment in the style of mid-20th century Disney television.

Mackenzie Foy, lively Twilight alumna, turns up as Jo Green, an unhappy teenager sent to live on a sun-blasted horse corral. She scowls at her hunky uncle John (Glen) and expresses little interest in the feisty black mare that has recently been dragged into captivity.

Soon enough (you know how these things go) horse and girl discover an affinity and become cross-species chums. But economic woes and the snooty girl in the big farm are lurking to sour the idyll. A little late in the action, Beauty begins her journey through various sorts of contemporary equine misery.

The opening aesthetic might be compared to the images manufacturers place in picture frames before sending them to the retailer. Horses gallop in golden light. Immaculately made-up young ladies mope in golden light. Golden light casts itself across welcoming fields.

As Beauty slips into more miserable circumstances – including an updating of the novel’s attack on London horse cabs – the palate darkens but we never get too far from that warm glow. Winslet’s tone is less frontier rebel than chummy head girl in a good-natured boarding school yarn. Nobody scrunches his eyes towards golden light more convincingly than Iain Glen.

Acquired by Disney+ (its natural home, as noted above), this Black Beauty will be nobody’s definitive adaptation but it will do well enough for those not wedded to the original text. True-blue Beebies should, however, approach with caution.

On Disney+ from November 27th.