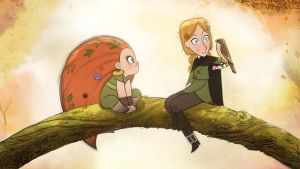 It is a little over a decade since Cartoon Saloon established itself as the Irish film industry’s unlikely miracle machine. Noting those four Oscar nominations for their first four features – only Pixar can compete with that batting average – one might reasonably argue that the Kilkenny-based animation studio had nothing left to prove.

Yet Wolfwalkers feels like an advance and a refinement on their previous work. Completing the “folklore trilogy” that began with The Secret of Kells and continued with Song of the Sea, the new film is tighter, more dynamic and less inclined to whimsical meandering. It is every bit as beautiful as its predecessors. The connection with domestic history is still strong. But the kinetic rush of the action is all new. This feels like their best film yet.

Setting a family entertainment among the Cromwellian atrocities of the 17th century sounds like a potentially incendiary move. But Wolfwalkers could hardly be more conciliatory.

Robyn Goodfellowe (voiced sweetly by Honor Kneafsey), the protagonist of the piece, is a northern English girl sent to Kilkenny with her decent wolf-hunter father (the indomitable Sean Bean) in a time of rising tension. Hundreds of miles from home, surrounded by potentially hostile neighbours, she too is a victim of colonisation.

“At least the old King kept us safe,” one Kilkenny citizen says nervously. (Were ye Twitter around, that “centriste scum” would, no doubt, be screen-grabbed beside an image of Stephen Rea taking names in a film Neil Jordan hadn’t yet made.)

On her explorations in surrounding forest, Robyn meets a wild young girl called Mebh Óg MacTíre (Eva Whittaker) and gets caught up in the magical world of the Wolfwalkers.

The film imagines a more benign version of the middle-European werewolf – creatures existing in the penumbra between wolf and human. They are protective of humankind but fearful of the encroaching dangers on the wolves’ environment. Mebh and her mother, Moll (Maria Doyle Kennedy), may be the last of their kind. The analogy between the wolves’ plight and that of the occupied Irish need hardly be clarified.

We have come to expect stunning visuals from Cartoon Saloon and Wolfwalkers does not disappoint. Tomm Moore, director of the preceding two folklore projects, and Ross Stewart, previously art director and concept artist, offer a startlingly effective contrast between city and countryside: Kilkenny is rendered in flat geometric grids; the woods and fields invite organic whorls that throb to the beats of a pounding score by Kíla and Bruno Coulais. The animation, largely two-dimensional in appearance, becomes richer as the film progresses towards a dizzying psychedelic showdown.

None of this would matter if the story were not so strong and the characters so richly embroidered. Collins’s script spreads conflict among the villagers and allows Robyn’s dad – in theory an enemy of both wolf and Irish person, remember – the opportunity to reconsider his responsibilities.

The film also happens upon an excellent villain. A number of overseas reviews have failed to grasp the significance of calling the presiding occupier “the Lord Protector”. He is never identified specifically as Oliver Cromwell but that title is inextricably linked with the warty member for Huntingdon.

Voiced malevolently by Simon McBurney, this version comes across as a more revolting variation on Vincent Price in Witchfinder General. He is all bile. He is all austerity. He is no bloody fun. He represents the worst for humans and their wild, canine neighbours.

If one wished to be awkward, one might argue that Wolfwalkers is 10 minutes too long, but it always favours action over pretension, incident over introspection. A PG folk-horror Inglourious Basterds for all the family. What more could you ask for?